Henry Rodriguez gets the nod, both for his walk and two-RBI double and for his ability to make Dave Cameron eat his words. Yes, Hank Rod posted a wRC+ of 59 this season...after breaking his wrist earlier this season at AA Pensacola (where he was slashing .348/.385/.439 in 144 PA before the injury).

Now, do I honestly think Rodriguez is a MLB caliber #3 hitter? No, no I don't, but I believe he's much, much closer to being that than Miguel Cairo is to being a MLB caliber #2 hitter. Where exactly am I going with this? Well, Cameron tweeted earlier that "Even Houston laughs at this group." That's categorically false, good sir.

Props are also due to Denis BABIPhipps and his 2 for 4 day, as well as to DiDi Smalls and his RBI single. I suppose I should also mention that Johnny Cueto returned to his ace ways, giving the Reds 6 shutout innings...but it was the Cubs, and who really celebrates shutting them down, anyway? 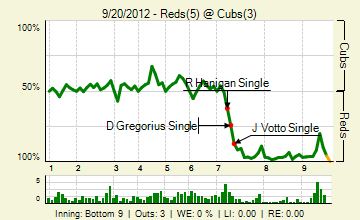