Good Joey Votto is Gooder Than Any Cub, Ever. Ever. Reds defeat Cubs, 6-5.

Share All sharing options for: Good Joey Votto is Gooder Than Any Cub, Ever. Ever. Reds defeat Cubs, 6-5.

Joseph Daniel Votto is back, friends. Good lord, that feels great to say. Joey had been "maintaining," of sorts, since he returned from his knee injury, but he's increased his production in the last two games. Maybe that's just because he hates the Cubs, but maybe, just maybe, that's because he's back to being his dominant self. Votto went 2 for 4 with a double, 3 RBI, and 2 walks, and carried himself like the classic battleship typical of all great division winners.

Wait, what's that you say? The top of the order actually got on base in front of Votto? Hallelujah! Holy s**t! Where's the tylenol? Drew Stubbs was the primary contributor, going 3 for 5 with 3 runs scored, an RBI, a walk, and a stolen base. Wait, really? He can do that? Against a LHP with a Cubs jersey, he sure as heck can. Salud, good Drewfus. 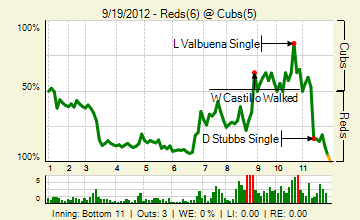