Homer Is a Great Name for A Pitcher in a Road Game! Reds defeat Cubs, 3-1.

Share All sharing options for: Homer Is a Great Name for A Pitcher in a Road Game! Reds defeat Cubs, 3-1.

Sure, it was the Cubs, but Homer Bailey was pretty dad-gum dominant tonight, going 7.1 innings while allowing just 4 hits and 2 walks and a single earned run. Bailey struck out 4, and didn't allow an extra base hit until Bryan LaHair's RBI double in the 8th. Bailey as all but locked up a spot in the postseason rotation, and with yet another dominant performance in a road game, the only question that remains is whether the Reds brass will believe in his career stats enough to give him a start on the road. Personally, I think they'd be silly stupid not to.

Honorable mention is due to Ryan Hanigan, whose double in the 6th cleared the bases to score all 3 Reds runs. Jay Bruce also had a solid night, going 1 for 3 with a BB and SB, and Joey Votto got back to his extra base crushing ways with a double. 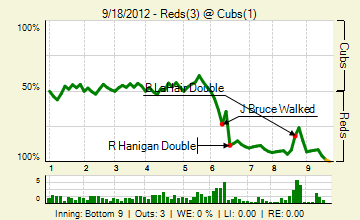