Share All sharing options for: It's Been Fun, Ozzie. Well, Not for You, but Y'Know What I Mean. Reds defeat Marlins, 5-4.

The Reds did their very best small-ball performance today, cranking out 16 singles and stealing two bases in their 11 inning affair. Only Todd Frazier could muster an extra base hit (a double), and the Reds threatened to break our hearts by leaving 14 men on base.

However, Ryan Ludwick rendered moot our worst fears, singling in Chris Heisey in the Top of the 11th to put the Reds ahead for good, thereby earning the JNMHSotG. Well clutched, Sir Psycho Studdy.

Mat Latos also deserves some props, and he was solid through 7 innings, allowing 3 ER while striking out 8 and walking just 2 over 96 pitches. Wait, what's that? He was sent out for the 8th inning despite having a lead and an arsenal of relievers available courtesy of September's expanded rosters? I'm sorry, I'm going to choose to ignore the fact that happened, since it never should have. 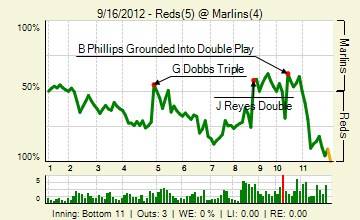