Share All sharing options for: Series Preview: Reds at Cubs 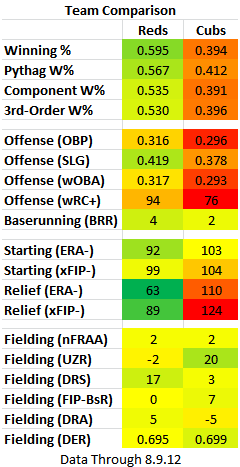 Reeling after rediscovering their mortality, the Reds head to Chicago for a four-game series against the Cubs. The Reds haven't faced the Cubs since May 3rd, when they beat them to split a rain-shorted series (the postponed game from that series will be made up in a day/night double-header in Cincinnati a week from Saturday).

This is the first time I've profiled the Cubs this season. They have most definitely struggled--bad offense, meh rotation, horrible bullpen--but some of their recent callups are interesting players and could spell good things for the organization in the future. Certainly, you have to like their front office. But that said, they have a looong way to go. This is as good a chance as any for the Reds to get back on their feet. 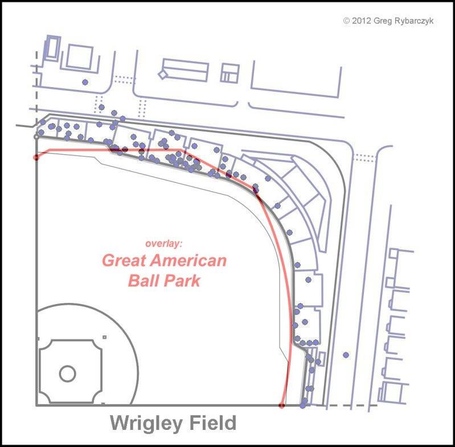 I have no data to support this, but with Candlestick Park out of the picture, I'd guess that Wrigley Field is probably the park that is most influenced by wind conditions. When the winds are blowing out, this park is one of the best places to hit in baseball. But when not, it probably plays as only a slight hitters' park. It's a bit deeper down the lines than Great American Ballpark, but the rest of the fences are about as close as you'll see.

According to Hit Tracker, four balls have been hit onto Waveland Avenue past left field, and one has been hit to Sheffield Avenue this season. 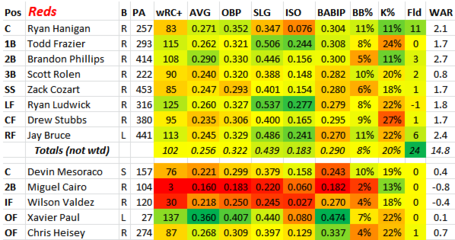 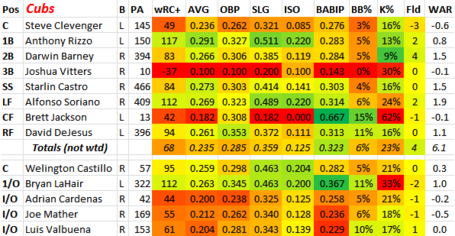 The Cubs have really overhauled their lineup in recent weeks. The enigmatic Geovany Soto was shipped to the Rangers, leaving Steve Clevenger and Welington Castillo to do the job. Castillo is probably the better prospect, with a good eye and decent power to go with good defensive reviews, though Clevenger has been getting a majority of the starts thus far.

Anthony Rizzo has replaced Bryan LaHair, who is having a pretty nice season despite losing his primary starting job. Rizzo is a much-ballyhooed prospect who was acquired from San Diego last season. He came up briefly last year, and probably wasn't ready. Now, it seems that he is, and he's off to a decent start. LaHair is one of those AAAA players--power/on base monsters in the minors who scouts don't think can keep translate to the majors--and after a very hot start has cooled considerably. A 33% strikeout and below-average fielding stats show what scouts worry about, and it's not unreasonable to think that his .367 BABIP might continue to fall with more playing time.

The other newcomers, promoted just last week, are Josh Vitters and Brett Jackson. Vitters was the third overall selection in Devin Mesoraco's draft (2007). He's been something of a disappointment in the minors, posting a career .283/.327/.455 mark in six seasons. This year, however, he slugged .304/.356/.513 at AAA, and the Cubs promoted him to see what they had. He's essentially replacing Ian Stewart, who was catastrophically bad (again) in the first half before going on the DL.

Jackson, meanwhile, was pretty hyped up last year before falling off a bit as his BABIP regressed in his second year at AAA. He probably has a ceiling of a Mike Cameron or Chris Young (or Drew Stubbs, for that matter) type--lots of strikeouts, low average, but good speed, power, and defense. Whether he can make contact to achieve that ceiling is an open question. He's had a rough first couple of games.

Hey, did you know that Starlin Castro is still just 22 years old? I mean, he's not having all that great of a year, but wow. 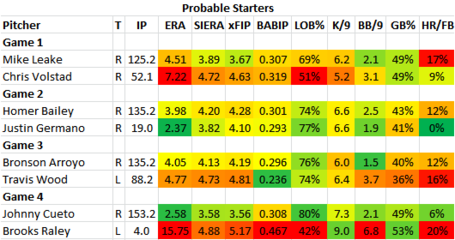 Yikes. The losses of Ryan Dempster (trade) and Matt Garza (injury) have absolutely decimated this pitching staff. The Reds are missing their remaining "ace," Jeff Samardzija, though I'm sure we'll see him next week. Rundown:

Chris Volstad's line this year looks a lot like his career line: decent ground ball rates, but a few too many walks and far too few strikeouts to be effective.

Former Reds farmhand and one-time starter (he literally started one game for the Reds) Justin Germano takes the mound in Game 2, and has thrown well this year...but the 29-year old has 272 innings in the big leagues and a career 4.54 xFIP. This is probably his last shot, though I don't think the Cubs can be expecting much.

I was as big of a critic of the Travis Wood/Sean Marshall trade as anyone when the deal went down. But despite being given a good opportunity with the Cubs, Wood hasn't had a good year. His ground ball rates will always be very low, and I don't see him getting his strikeouts a lot higher than they have been, which means he has to avoid walks to be effective. Instead, he's been pretty wild. I thought he was a solid #4 starter, with maybe a #3 ceiling. Maybe I was wrong about him.

Finally, the Reds get the recently promoted Brooks Raley in game four. It will be his second career big league appearance. From what I can see, he looks like a fairly typical soft-tossing lefty in the minors. Not much in the way of strikeouts, a few walks, solid home run rates. He got a good number of ground balls in his first start, but was wild as all heck. He's 24, but I don't think he made any prospect lists prior to the season. 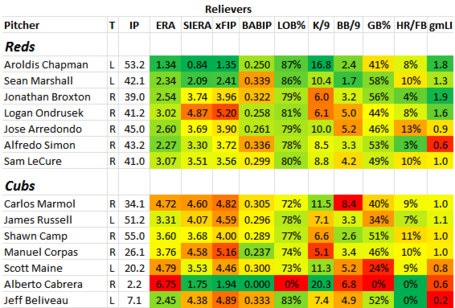 It's hard to say for sure, but this might be the worst bullpen I've seen this year. With the exception of the guy who has thrown 2.2 innings, there's not a single reliever with an xFIP below 4.0. I guess some guys have average-ish SIERAs. But yuck.