Call Your Congressman! Repeal the Law of Averages! Reds Lose to Brewers, 3-1.

Share All sharing options for: Call Your Congressman! Repeal the Law of Averages! Reds Lose to Brewers, 3-1.

Johnny Cueto was, once again, exactly the kind of pitcher the Reds should have wanted on the mound after losing two in a row. Ace tossed his 18th quality start out of his 23 starts this season, going 7 strong innings while allowing only 3 runs. He struck out 9, walked none, yielded only 6 hits, and did pretty much all you could ask. Unfortunately, "Unfortunately, the pitching" version 2012 struck...meaning "Unfortunately, the offense."

Honorable mention to Zack Cozart, whose double in the 7th broke up the perfect game being tossed by that Brewers rookie pitcher who will now fade away to anonymity. And folks, that's about it. Votto...?! 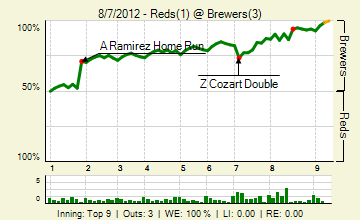