Scotty Baseball was 2 for 2 with 2 walks and a run scored, and also made several vintage Scotty plays on defense. Don't look now (ok, you can look), but Rolen's season OPS is higher than Stubbs, Cozart, Mesoraco, and Hanigan (and Cairo and Valdez, of course). Not bad, old man. I just hope it's not a mirage. 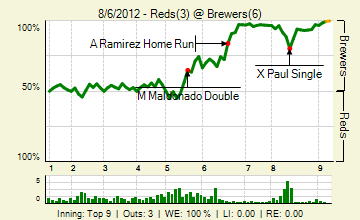