Share All sharing options for: Series Preview: Reds at Brewers 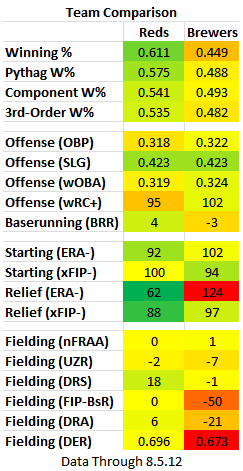 After a successful weekend series against the second-place Pirates, the Reds go on the road to once again face a sub-.500 team in the Brewers. The Brew Crew, despite what can only be described as some happy surprise performances from several players, have been overall a disappointing team this year. They've underplayed their Pythagorean and component-Pythagorean records, but by any measure they have been no better than an average team.

Offensively, they've played pretty well despite a disappointing performance from Rickie Weeks. They're not an amazing offensive team, but they're solidly above-average for an NL squad. Their starters have a higher ERA than xFIP, and in part that is almost certainly due to the team's poor fielding performance. Their bullpen has also been disastrous; despite acceptable peripherals, they've been rocked all year long.

The loss of Zack Greinke via a trade weakens this team even more for the stretch run, though they did acquire a very good middle infield prospect in Jean Segura in the deal. He's not up yet (currently at AA), but given what the Brewers have gotten from their SS this year, he's almost certainly going to arrive as soon as the club deems him ready. I would expect to see him sometime in 2013, unless he hits a major road block with his performance.

I might get a chance to go to Miller Park a week from Friday, though it'd be for a Phillies/Brewers series. I'm hopeful, as it seems like a nice place. The porch in right field is approaching GABP-short, but overall the park plays pretty close to neutral, with a slight lean in favor of pitchers. 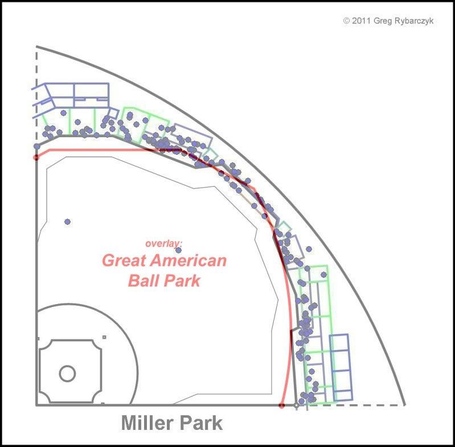 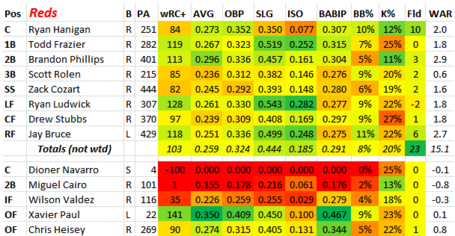 Don't look now, but Drew Stubbs has gotten his line almost up to league average. He's sporting 1.8 WAR on the season by my reckoning, which seems like a lock to clear the 2.0 WAR plateau (league average player). I'd certainly hoped for more from the guy, but you can do a lot worse than Stubbs. He is probably worth somewhere in the vicinity of ~$10 million in surplus value on the year compared to his replacement cost on the free agent market. His BABIP is now finally right around league average.

Carlos Gomez has been crazy hot of late, and has interesting been hitting for power; he has 9 home runs this year, 5 of which came in July, after hitting just 25 in ~1700 PA's prior to this season. He's always had a lot of talent, but it could be that the 26-year old (yes, he's only 26!) is finally finding his stroke.

If you ever start to feel frustrated about Zack Cozart's uninspiring line, take a look at Cesar Izturis. Izturis is still getting about 3 of every 5 starts over Cody Ransom, almost certainly because of his fielding, and when he plays Cesar is the only legitimately bad hitter on this team.

Bronson Arroyo's strikeout rate is starting to slip back down after being over 6 k/9 for most of the season. But at least Johnny Cueto's line continues to look better and better as the season goes on. I'm still a skeptic, but I'm probably one of the last hold-outs among Reds fans.

I think I celebrated Michael Fiers in the last Brew Crew preview, but it bears repeating: the guy is having a great season. Randy Wolf, on the other had, has been awful. I think we might be seeing the end of his very successful big league career. 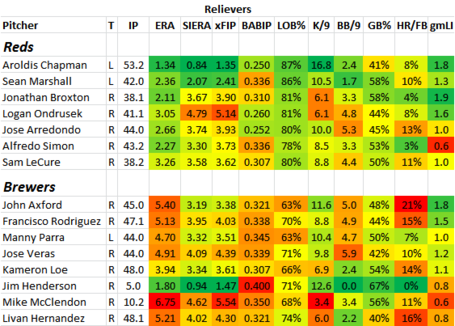 So far, so good for Jonathan Broxton. His ability to induce ground balls, at least, has been a positive in his handful of appearances thus far.

John Axford is having a really frustrating season from a sabermetric perspective. Yeah, he's walking too many, but he continues to get lots of strikeouts and lots of ground balls. The Brewers had given the closer job to Francisco Rodiguez for a little while there, but seem to be moving back toward giving the ball to Axford. Really, if it's not Axford, who would you place in that role? Maybe Kameron Loe? Manny Parra also has nice enough peripheral numbers, but he's the lone left-hander in the pen...