Red Reporter hung out in the Fox Sports suite, acted all big

Share All sharing options for: Red Reporter hung out in the Fox Sports suite, acted all big

For (I think) the first time ever, Red Reporter was name-checked on a Fox Sports Ohio broadcast. I won't say the video (of the video) capturing this moment went "viral" - it's safely below 300 YouTube views - but it did generate a brief sidebar discussion here.

So, first things first. Especially after hearing from our Blog Manager Emeritus (Slyde, who is now in the FSO booth), I think the exchange between Thom and Chris about the blogs denigrating the FSO crew was just playful banter - nothing personal or heated. It's a known fact that this site isn't MediaWatch. We write about the team and rarely the commentators.

One of the virtues of Red Reporter is that we have a forum where anyone can air out their opinions about the Reds and those that cover them. But we don't have an axe to grind with the FSO announcing crew. Or anyway, I don't. I watch their broadcast pretty much every night I possibly can. Whatever their faults, it's not really in my interest or purview to expound on them.

-ManBearPig, BK and I took a trip down to the stadium to take in Reds-Padres and Edinson Volquez's homecoming and we had a killer time. By no fault of our hosts, the game itself was horrible - featuring a rough innings from Leake and Simon and a combination plate of concussion and suspension for Devin Mesoraco.

It's going to compromise the journalistic integrity of the previous when I say that Fox Sports Ohio rolled out the red carpet for us that night. Luckily, I'm not a journalist. Thom was sporting enough to mention us on the air and the entire Fox Sports Ohio crew bent over backward to see that we had a good time. Maybe we looked like street urchins down on our luck? In any case, I have no business telling you how to feel about FSO, but we owe them a debt of gratitude for a highly enjoyable and memorable evening. Maybe someday I'll own a stadium and be able to return the favor.

Among other things, we got to rub shoulders with Hal McCoy. Which is a little bit like a romance novel writer sitting on the same panel with William Faulkner. Besides the VIP access and name-dropping opportunities, we also had a chance to try out Fox Sports' Game Connect - which is a web-based dash board designed to provide a second screen experience to viewers.

By full disclosure, Red Reporter competes for eyeballs with online FSO content on some level. But I see plenty of room for collaboration and I think FSO does too. FSO was willing to listen to my half-formed feedback, delivered between food-chews. There were two features I found especially useful as a blogger and someone who tweets and comments on a game live. 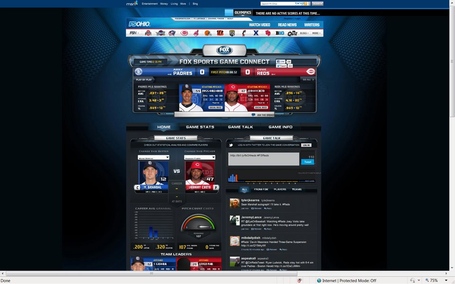 Via Game Connect, you have easy access to compare current pitch counts with season average average pitch counts and similarly easy access to match-up and situational splits. It requires context to know what stats are meaningful, but it's nice to be able to find them quickly in a slick graphic-user interface.

Let me also add: I promise we're not too starry-eyed to give you the hard-hitting RR coverage you deserve. But I should also mention that we got to eat ice cream sundaes. Maybe someday there will be a Red Reporter box at Great American Ball Park. 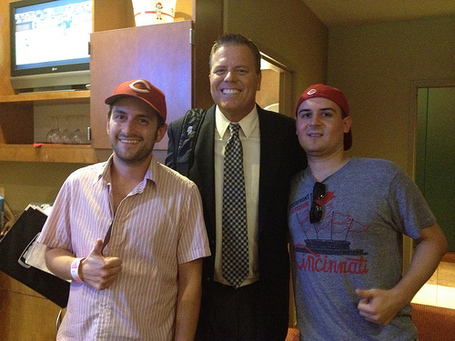 The Greatest trick Red Reporter ever pulled was convincing the world it was a legitimate source of information. 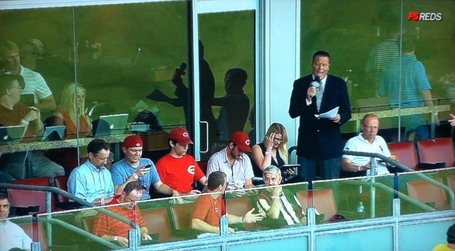 Red Reporter & other Reds blogerati trying to avoid eye contact with the game.