It's the Astros, We Won! Who Cares...It's Joey Votto Eve!

Share All sharing options for: It's the Astros, We Won! Who Cares...It's Joey Votto Eve!

Drew Stubbs. By abdicating his spot at the top of the lineup, everyone around him and in his stead was magnificent. Sergeant At Arms to Stubbs' Top of the Lineup Lieutenancy Zack Cozart hit his 15th homer in his 2 for 4, 2 Run effort. Chris Heisey went 2 for 5 with 2 runs scored at 2 RBI, and Brandon Phillips went 3 for 5 on the evening and in the process saw his season average rise to .300. That's the kind of top of the order production that screams "we're playing the Astros!" I like it.

Oh yeah, every position player who started tonight had at least one hit except for Scott Rolen...but he walked.

angeeh, you get the honor this evening. Not only are you a valued sense of reason and nursitude, you bring a levity to this bunch of rabble-rousers that deserves merit. Stopping by on a Friday after an offday to pitch in on an Astros thread thoroughly qualifies. RR loves ya, girl. 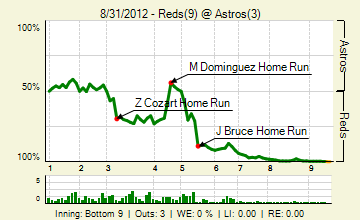