Share All sharing options for: Series Preview: Pirates at Reds 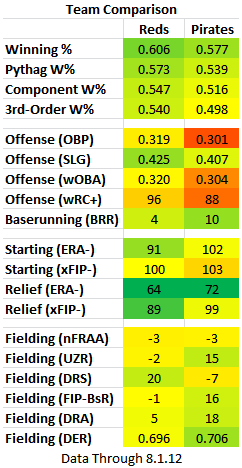 This is the series that the Reds have undoubtedly been eyeing for the past several weeks. Despite an amazing 20-3 run, the Reds have only climbed 3.5 games on the Pirates, who come to town for a weekend series. Yesterday's win ensures that the Reds cannot lose first place in this series alone, but obviously this is a great chance for the Reds to gain some ground--or for the Pirates to creep back toward first. And with major losses to the Reds' lineup in both Joey Votto and Brandon Phillips, while the Pirates are running at full strength, this might be the Pirates' best chance to make a statement. All told, the Reds and Pirates have just nine games remaining together this season, the next being September 10-12.*

* I just noticed that the Reds close out the season in pretty spectacular fashion, with series against both the Pirates and Cardinals. Whoever designed the schedule was omniscient...

The Pirates have probably overperformed to this point. While their offense is massively improved from where it was earlier in the season, it still has struggled, especially in terms of getting guys on base. Their rotation has been surprisingly average, given what I thought I knew about this team, and their fielding also surprisingly good.

That said, this is a team in which I'm not sure their season numbers mean a whole lot because they've had some pretty major turnover. Since the Reds last saw them, the Pirates have added a new starting pitcher and three position players, from both trades and graduations of prospects to the majors. I can see this team becoming a very potent offense if things fall right for them, and I'm a bit scared of their rotation. It's an intriguing team, and I think they have a legitimate shot. 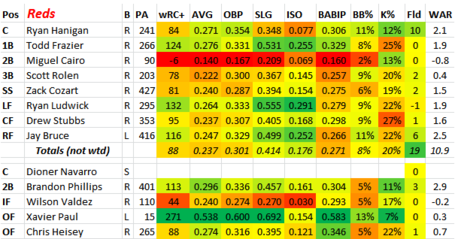 Assuming that BP is still out of the lineup...eek. Ludwick's been scorching hot throughout this winning streak, with major strides also from Drew Stubbs. Bruce has been better of late, and Frazier continues to be valuable, but there's just no question that the Reds really miss having Votto and Phillips in the lineup. But, you go to war with the army you have, right? 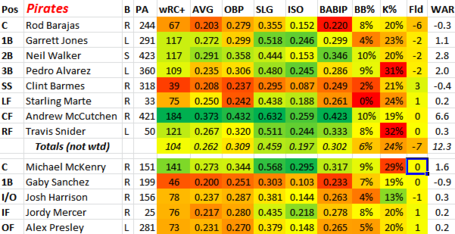 The Pirates acquired both Travis Snider and Gaby Sanchez at the trade deadline. Sanchez, a righty, is expected to platoon with Garrett Jones...but because the Reds only have right-handed starters, he'll probably not play a big role in this series except as a pinch hitter. Snider, on the other hand, is a former top prospect (if you can be a former prospect and still only be 24 years old) with good power. While he struggled last year, he hit 0.255/0.304/0.463 as a 22-year old in 319 PA's in 2010, and has hit 0.335/0.423/0.598 in AAA purgatory this season. I'm not saying he'll be an all-star, but, given his ceiling, I think this is a nice pickup for the Pirates. He does strike out a lot--and is putting an exclamation mark on that this year in his first 50 MLB PA's--he has enough power to be a valuable cog in the corner outfield. The Pirates needed a bat, and I think they found one.

The other new face in the lineup is Starling Marte. Marte is a 23-year old rookie. The line on him is that he's a terrific athlete, with good power and fielding skills...but a rough approach at the plate. He's yet to take a walk, and didn't walk much in the minors either, while also striking out a fair bit. He has power, but I do question whether he'll last the rest of the season in the Pirates' starting lineup.

Those guys are added to a lineup that features perhaps the best outfielder in baseball in Andrew McCutcheon. Umm, remember how good of a year Joey Votto was having? Well, McCutcheon has arguably been just as good, if not better. He leads Votto in wRC+ 184 to 181 (this includes park adjustments). AS A CENTER FIELDER. I'm mean, holy crap he's good! On top of that you have Neil Walker, Garrett Jones, Pedro Alvarez...this is really becoming a very solid offense.

The Pirates also picked up Wandy Rodriguez from Houston, who we just saw in the Houston series and is a really nice pitcher. After that, the Reds will face two other solid pitchers in James McDonald and Erik Bedard. Bedard has struggled a bit, but his peripherals still indicate a solid #3 or #4 starter. James McDonald has been slipping as well as the season has gone on, but again looks like a very solid mid-rotation starter.

I see both the Pirates' and Reds' staffs as pretty similar--both are solid all the way through, full of guys who will post peripherals that lead to a 3.75-4.15 xFIP--and probably a similar ERA. If you want to throw in a caveat for the mystery that is Johnny Cueto, that's fine by me. 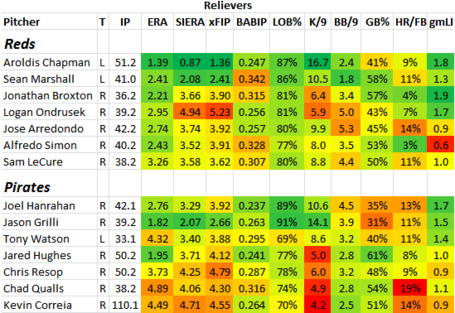 Fun thing on the Reds' pen: compare the lines of Jonathan Broxton, Jose Arredondo, and Alfredo Simon. Each have posted almost identical results, but do so in very different ways.

The most dangerous pitcher in the Pirates' pen this year is 35-year old Jason Grilli. After taking a step forward last year, Grilli has been fantastic this season in a set-up role. His walk rate has actually been declining as the season has gone on, and his strikeout rate remains insanely high. He's someone for whom I'd love to see a pitchf/x profile. A quick glance at his fangraphs page shows he's basically throwing fastballs (in the low 90's) or sliders, and there is a pretty clear difference in the movement reported by on slider pre-2011 and what he's been throwing these past two years. Whatever he's doing, it's working.

Hanrahan has continued to be effective as a closer, though his high walk rates and high fly ball rates make him vulnerable to a blow-up, as happened a few nights ago in Chicago. Tony Watson is the lone left-hander in the pen, and he's posted very solid peripherals despite the 4.32 ERA. His job will be to get Jay Bruce out in late innings.

The rest of this pen, now that Brad Lincoln has departed, is interesting because of its uniformity: everyone has good control, and everyone gets ground balls, but everyone also shows below-average strikeout rates. Correia has thrown all of his innings as a starter, and might scale up a bit as a reliever.