Chris Heisey and his 2 honked wangers get the nod today. Heisey had been banished to the end of the bench with the successes of Ryan Ludwick and Todd Frazier (and the emergence of Xavier Paul as a decent pinch-hitter), but he contributed hugely today in what was otherwise a mundane getaway-day lineup. In all, the Reds hit 4 homers today (Dioner Navarro and Brandon Phillips each had one) in support of Mat Latos, who picked up his 11th win of the season after a rugged 7 inning, 2 ER performance.

Solid work by the guys with Luddy, Rolen, Hanigan, and Votto out.

Hey, boy Blue is back, and the dude was on fire today. If you're too busy to delve into the game thread, do yourself a favor and ask him what Clint Hurdle thinks of Yadier Molina. Do it. 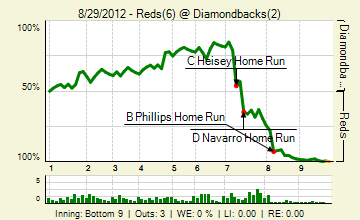