Roy was up to his usual tricks tonight, going 2 for 4 with a run scored and the 2-RBI triple that put the game on ice in the 8th. Wade Miley's second place campaign effort was admirable, as the lefty threw 7 innings of 3 ER ball, but the matchup of the two likely leaders in the Rookie of the Year race ended in Frazier's favor. His season line currently sits at .295/.355/.555. Remember when I said that in the last 56 seasons, only Austin Kearns and his .907 OPS in 2002 was better than Frazier's 2012 rookie campaign? .910, folks...the best since Frank Robinson.

Honorable mention is deserved by Johnny Cueto, who was his usual Cuetastic self while picking up his league-leading 17th win (7 IP, 2 ER, 4 H, 5 K, 1 BB). Ryan Hanigan was 2 for 4 with 2 RBI, too, and deserves some serious props for his .290/.382/.359 season. The guy had every blabbering head who had access to a microphone calling for the best catching prospect in the minors to be the everyday catcher for the Reds, yet Hanigan has quietly done what he's always done: play impeccable defense, call a great game, and get on base. The guy deserves a lot more praise than he gets, as do Walt and Dusty for sticking with him.

This remarkable season is slowing drawing some RR All-Stars out of retirement, and our co-pilot was the latest. We've seen 'tHan and thevole return, Ash and 3 Fast 3 Furious, and now Farneyismycopilot all in the last few weeks. PAGING FAT VEGAS ALAN! I'd page 'creds, too, but let's be honest...we all know the Reds are winning because he's not around anymore. 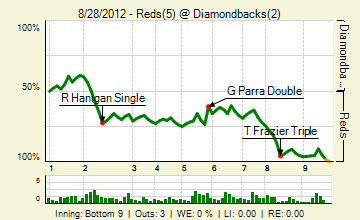