Share All sharing options for: Series Preview: Reds at Diamondbacks 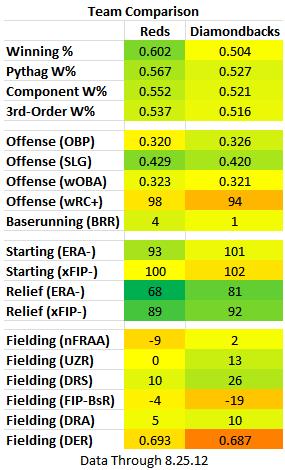 After losing two out of three games to the Cardinals, the Reds head west to face off with the Diamondbacks. While losing a series to the team chasing you is never fun, the Reds still rate out as nearly certain to make the playoffs, and only slightly less certain to win the division, even acknowledging that the Cardinals may post a better winning percentage over what remains of the season. There just aren't that many games left, and the difference between the two teams just isn't that great.

In any case, it's time to focus on the Diamondbacks. This team profiles as a solid 0.500 team. Their offense is a bit below average (after park adjustments), their rotation is pretty average, and their bullpen is somewhere in the vicinity of solid to above average. They're not outstanding at any one thing, but they are capable of winning any given series. They seem to be rebuilding a bit given their recent trades, but it doesn't take a lot of dreaming to see a contending team here...especially given some of the young pitching they have in their system. As they did the last time these two teams met, the Reds get to try their hand at one of the Diamondbacks' phenom starting pitching prospects, which should make this series fun. 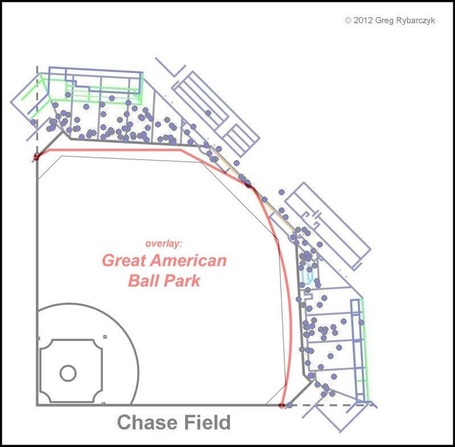 Chase Field is a spacious park because, like Coors Field, it has to be. Phoenix, Arizona, sits at 1,150 feet, and during much of the year the air is dry dry dry. As a result, the ball sails around this park. The deep (and often quite high) fences mean it's not the home run having you might fear, but that leaves a lot of real estate to cover, resulting in lots of doubles and triples. This time of year, you can experience pretty humid days in Phoenix, but as a result they almost certainly will have the air conditioning running at game time. The result is much drier air, at least down on the playing field.

This is also sort of my old stomping grounds, as I spent seven years living in Phoenix while in grad school. It's a great place to see a game; if you don't mind a walk, parking can be had for pretty cheap--I even scored street parking a few times just a couple of blocks south of the ballpark. When they have the roof and the outfield "windows" open, it can be a nice place to see a game. And frankly, when it's really frickin' hot out, I still quite enjoyed watching baseball be played indoors. My six year old attended her first game there when she was a baby (Carlos Quentin hit his first career home run), and I attended my only playoff game there several years back (Cubs/Diamondbacks )--lots of fun. 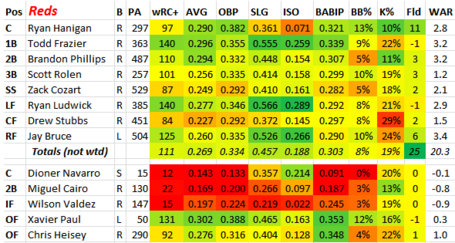 I try not to get pissy about the bench, but I'm pretty tired of both Cairo and Valdez taking up PA's. Between them they've received 277 plate appearances and have been abysmal. One of them is likely to get the boot when Votto returns this weekend. Could this be the end of Cairo's tenure with the Reds?

The Dbacks traded away Stephen Drew at the deadline because he was headed for free agency (he has a mutual option for 2013, but it seemed unlikely to be picked up). Unfortunately, they don't really have much of a plan B. John McDonald is the defensive option, but they seem to be going with Jake Elmore, who I'd never heard of but hit 0.344/.442/.465 this year in AAA as a 25-year old. If Willie Bloomquist comes back from the DL, he might also get slotted in there.

Otherwise, this is a nice, solid, consistently good lineup without any major weaknesses. If we had a left-handed starter, we might see Chris Young in center field, but he seems to have ceded the starts against left-handers to Gerardo Parra. I'm pretty surprised at how good Chris Johnson has been (i.e. he hasn't been a catastrophe), and I might have been wrong about him.

We get to see Tyler Skaggs! Skaggs has had a very nice season across AA and AAA this year, and has pitched his way into the upper eschalon of prospects, with some saying he belongs in the top-20. He doesn't throw especially hard (low 90's), but reportedly has several good pitches as well as a great idea of what to do with them. His first appearance featured a lot more walks than one would expect (not to mention oodles of fly balls), so I'm interested to see what he does against the Reds' fairly aggressive lineup.

I did a little ode to Wade Miley in my last Dbacks series preview...and really, I think he's probably the deserving NL rookie of the year. He has 3.9 WAR, a 1 win lead over the #2 guy on the list...our own Todd Frazier (2.9 fWAR).

Patrick Corbin is another interesting young pitcher. He's basically a junkballer who gets by on location and deception. But so far, through 69 innings, it's working very well for the guy. I'm surprised, but that makes me like him even more... 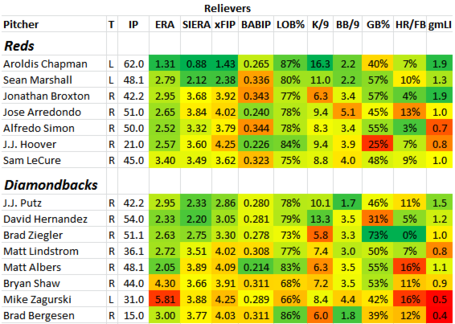 If you judge bullpens by ERA, and you shouldn't, the Diamondbacks are right there with the Reds during most games. The exception is a) their closer isn't as good as ours, and b) the back of their pen has struggled a bit. I like their three main guys--Putz, Hernandez, and Ziegler--but am pretty "meh" on the rest. Matt Lindstrom was just acquired last week for Joe Saunders, and he doesn't look like anything special to me...but neither is Joe Saunders. Mike Zagurski is their only left-hander in the pen--all the more surprising given that three of their five starters are southpaws!