After today, Great American Ballpark will no longer run the risk of being infected with St. Louis Cardinals for the 2012 regular season. That sounds like soothing news, isn't it? Under most circumstances, I would agree. However, the Reds have won four out of their last five games at home against those Whiny Little Birds and now look to win their second home series in a row against St. Louis.

It appears the Reds will forgo their Sparky Anderson Memorial Sunday Getaway Lineup in an attempt to strike another nail into the coffin of St. Louis' chances at winning the NL Central Division. The Reds will go with their standard lineup in absence of Votto save for the addition of Chris Heisey. Drew Stubbs will get a much-needed day off and will likely appear rejuvenated on Monday once he realizes that every woman in Cincinnati, Indiana, and Northern Kentucky wants to have his babies.

Wainwright's not Gone yet, so the Reds will have to overcome his ace material in order to take the series. The Cardinals' pitcher has an ERA of 1.16 over his last four starts. The Reds will, in return, counter with Homer Bailey who pitched decently against the Phillies on Tuesday lasting well into the seventh inning. Homer will face a Freese/Berkman-less lineup today. Yadier Molina, though, will return after getting Saturday off.

Let's extend our lead to eight games in the NL Central. Let's watch Homer Bailey beat the Cardinals again on a Sunday. Let's look at the lineups after the jump! Let's go Reds, they're my favorite team!

Why do St. Louis fans self-gloss themselves as the best fans in baseball? Well, for reasons such as this one, of course! 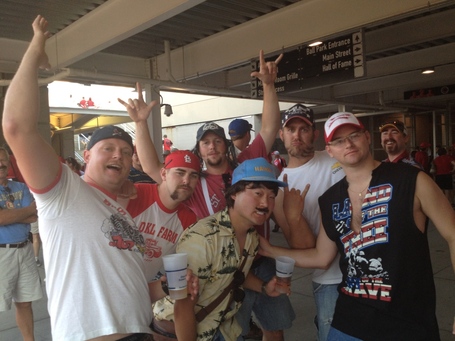