The Reds left 25 men on base tonight in total, and through 5 innings, they'd left 18 men on (as compared to, at the time, just 3 for St. Louis). That's a good way to ensure that you're going to lose regardless of what your pitching staff manages.

Todd Frazier continues to impress me, you, and everyone located in a state that's not bordered by the Atlantic Ocean. Frazier went 3 for 4 tonight with a walk and a run scored, upping his season line to .298/.357/.560. I thought he'd be solid, I thought he'd be a valuable player, but never in my wildest dreams did I envision him being 10th in the National League in OPS with barely over a month to go in the regular season (Min. 350 PA).

Pops Daniels, this is yours. You realize, of course, that since you brought up the concept of Red Reporter Retirement the Reds have gone 0 and 2, right? You realize that you currently carry the entire burden of vintage vulgarity and edgy humor that once drove this site now that Farneyismycopilot, Geki, and Fat Vegas Alan no longer roam these halls, right? Do you realize how clean-cut, unoriginal, normal, and Redslosey this place would be?

You earned this honor tonight, but you've earned our pleas to stick around over an illustrious 5 years around here. Don't do it, dude. Not yet at least. 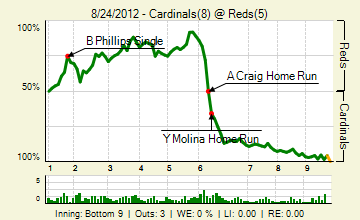