Share All sharing options for: Series Preview: Cardinals at Reds 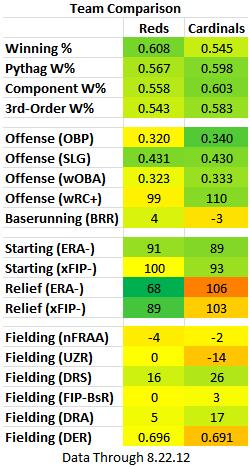 The Cardinals are in town for a weekend series in Cincinnati. Having finally overtaken the Pirates in the NL Central thanks to a three-game winning streak, the Cardinals can legitimately claim to be the Reds' top threat in the Central division. In truth, their underlying numbers (runs scored vs. allowed, batting stats, pitching stats, etc) have indicated that this is the case all season, but this hasn't translated into enough wins.

Still 7.5-games back (at press time, before the end of the Phillies/Reds game), it will take an enormous surge for the Cardinals to overtake the Reds with just over a month remaining. From their perspective, a sweep is almost mandatory...and in truth, they're probably focused primarily on the wild card race, where they are dead-on tied with the Braves (again, as of press time, before the Braves' evening game against the Giants).

That's not to say that the Cardinals aren't a very capable team, however. They have an excellent offense and very good starting pitching. Despite a weakness in the bullpen, they are fully capable for making noise in the NL Central. The Reds have their work cut out for them. 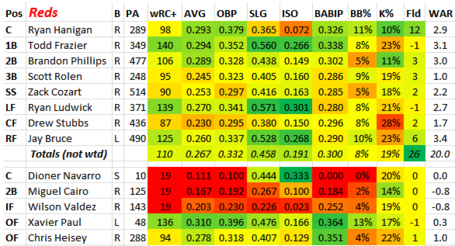 Ryan Hanigan has been on a bit of a tear of late and gotten his overall line just shy of average. It's a shame that his on-base-only offensive game is essentially wasted by hitting 8th. But at least there have been a few guys on base for him lately when he gets his singles.

Also of note is Scott Rolen, who is also close to reaching league-averageness. I just hope he can keep it up. I'm expecting/hoping that he'll get very frequent and regular rest once Votto returns to the lineup as Dusty subs Frazier in at third base and (sometimes, probably) into the outfield. By my reckoning, Frazier is #2 on this team in WAR behind Jay Bruce, non-Joey Votto division. 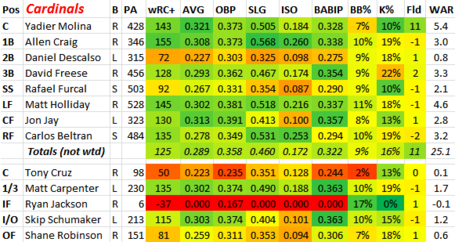 Allen Craig has pretty much solidified his role as the Cardinals first baseman. Even when Lance Berkman was back, briefly (he's hurt again), Craig got the lion's share of playing time at first base. And for good reason--he's been fantastic this year, and sports a .299/.356/.535 career line with 33 home runs in 689 PA's entering last night's game. He's pretty impressive. Add him to a lineup that already features Matt Holliday, Carlos Beltran, David Freese...goodness, that's a pretty nice lineup. With an overall team wRC+ of 110, the Cardinals have had the best offense in the National League this season.

It's been pretty gratifying to see Mat Latos have the second half that he has had. I don't know if he can be much better than a 3.5-3.8 pitcher when throwing at Great American Ballpark, but that's a heck of an asset to have. He goes against Lance Lynn, who is starting to show control issues but is having a fantastic rookie season. Jaime Garcia just came off the DL, but has been strong thus far and was his typical self peripherals-wise earlier in the year. And Adam Wainwright similarly seems back to his old self after missing last season with TJ surgery. This is as solid a group of three opposing pitchers as you see. Of course, the Reds just faced a good Philadelphia's rotation as well... 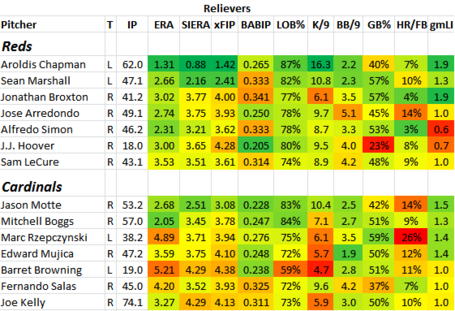 If there's a weakness to the Cardinals, it's their bullpen. Jason Motte is quite good. Mitchell Boggs is ok. Everyone else has been somewhere in the average to below-average reliever category. There's all kinds of confirmation bias issues here, but a bad bullpen, because of the high leverage of their innings, can drive a team to underperform Pythagoras. I'm not sure how big the effect size is--probably not enough to account for the Cardinals' underperformance this year--but it surely accounts for some of it.

This series scares me a little. But the nice part is that the Reds are so far ahead of everyone else that they can afford a rough series and still be just fine. And a winning series--they're just that much further ahead. I'm not resting easy, but it's fun to see the Reds in this kind of position this late in the season. Now that I've said that, I hope they don't go and blow it... :)