There's a three way tie for the honoree tonight. That's all well and good, of course, since the Reds won, and each of them had major impacts and played the roles of momentum-turners. First, Todd Frazier went 2 for 3 with a double and a tie-breaking HR in the 8th immediately after Bailey/Marshall had surrendered the tying runs. That was vintage Todd Frazier which, of course, is vintage. After the Phillies came back to tie things up, again, in the bottom of the 8th off of Broxton/Phillips, Zack Cozart picked them up with a lead off solo-honker off of grade A not-fun guy Johnathan Papelbon, capping his 2 for 4, 2 RBI night. Awesome.

Wrapping up the honorees, of course, is Aroldis Chapman, who came into his 4th game in 5 days to close out the Phillies. His last pitch of the night, which struck out Chase Utley (while not hitting him OR getting called for hitting him) was clocked at 102 mph. Considering the Reds' bullpen had already blown 2 saves before then, Chappy gets a nod.

Sometimes, it's quality that wins awards, while other times, it's quantity. Tonight, it was seniority, which makes me happy to note that RR commenter emeritus 'tHan was in the house tonight, and there's no coincidence that the Reds began to rough up Cliff Lee shortly after he stopped in. If you happen to see ol' 'tHan around these days, do me a favor and smack him on the back, say hello, make sure his boat shoes are tied so he doesn't trip and his hawaiian shirt is deliberately unbuttoned, and cheers his boat drink. He deserves it. 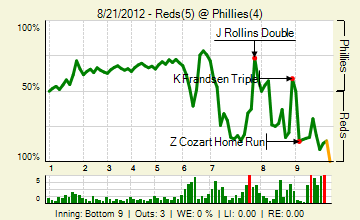