Share All sharing options for: Phillies Unleash a Phlurry of Hits; Beat Reds 12-5.

Jay Bruce went 3 for 3 with a double, a walk, and 2 runs batted in. Bruce's double was a nice shot off the right field wall. Hopefully, the Beaumont Bomber is getting back into one of his patented grooves. It sure would be a big help as the Reds chase the NL Central title. Honorable mentions are due to Chris Heisey and Brandon Phillips. Heisey went 3 for 4 with a double, a run, and an RBI. Phillips chipped in by going 2 for 4 with 2 runs.

A goodly number of regulars stopped by after a slow start. Justin, BubbaFan, and others contributed to some fun speculation on the playoff roster/rotation before the wheels came off the wagon in the fifth inning. Tonight, however, a good performance just wasn't enough. Former regular, brendanukkah, wins this one going away with his announcement that he was going to propose to his lady friend tonight. He returned to inform us that she said yes. Congrats, brendanukkah! We all wish you and your fiancé the best of luck.

On a much sadder note, kcox17 informed us that his friend, an usher for the Reds, passed away today due to injuries sustained in a motorcycle accident on Saturday. Red Reporter's thoughts are with you, fellow Reds fan, rest in peace. Let's hope that kcox17's friend and supergrover are enjoying some cold ones together "at the great ball orchard in the sky." 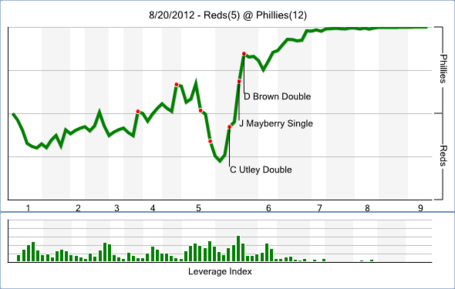