Share All sharing options for: The Old Man in the C! Reds defeat Padres, 9-4.

Scott Rolen went 3 for 4 today, walking once, scoring once, and driving in a run. Rolen has been on a tear for a month now, and his season line now sits at a near respectable .234/.313/.375. If he is truly healthy and this is what the Reds can expect, this offense (and the lineup flexibility) becomes much, much more lethal. Props, Pops.

Just don't ask him to hit leadoff. Xavier Paul, inserted into the starting lineup and the leadoff spot, went a sparkling 0 for 5 with 4 Ks. That spot is truly cursed, as evidenced by Zack Cozart's 2 for 5 day from the 6th spot in the depleted and shuffled Reds lineup. Todd Frazier went wanger honking again, belting his 13th of the season while driving in 3 runs on the day. A solid, solid performance by the Reds despite them fielding a lineup without, to date, their 3 most potent bats. Bring on the Pirates! 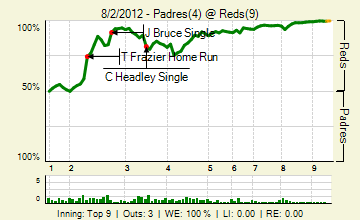