Xavier Paul and his 9th inning, pinch-hit triple get the nod today. Look, I've been pretty vocal about my thoughts on Paul, specifically how his presence as the lone LH bat off the bench may have kept the Reds from signing a more established bench bat; however, Paul has continued to produce, and today was no different. XP took the first pitch he saw from Shawn Camp and laced it into the RF corner, reaching third standing up. Solid stuff from the only bat picked up midseason.

Very, very large hat tips are in order to both Ryan Hanigan and Mat Latos. Hanigan hit a deep single over the head of the Cubs' CF to score Paul (the game winning run), and also made a perfect throw to gun down a stealing Brett Jackson at third in the top of the ninth as a part of his 2 for 3, 2 RBI day. Despite 3 errors from his normally dependable defense (which led to 2 unearned runs), Latos was pretty dominant, going 8 innings while allowing only 2 ER, striking out 6, and throwing 114 pitches over 8 IP the day after the bullpen was thoroughly gassed. Zack Cozart also had 2 hits (as well as some pretty nifty defense despite an error), Ryan Ludwick was on base twice via walks, and Jay Bruce had 2 hits and an RBI. That'll do.

Today's honoree is RR's own Poet Laureate, Cy Schourek. Our well-traveled compadre stopped by today's thread to hang out, make fantastic Arroyo innuendos, and dig up some stats before hitting the road to travel from his summer Seattle homestead to his St. Louis law school confines. Travel safe, buddy. Wait 'til you stop for gas to check up on RR.

Also, a big shout out to ashersky, who checked in from Iraq and called the walk-off (actually, he called that George Grande would call the walk-off!). Thanks for all you do, and be safe! 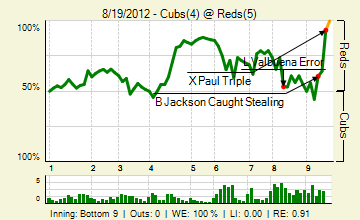