Double Header Double Take: Good? Bad? Reds Are the Ones in First Place

Share All sharing options for: Double Header Double Take: Good? Bad? Reds Are the Ones in First Place

The Joe Nuxhall Memorial Honorary Star(s) of the Game(s)

The matinee portion of the doubleheader saw Johnny Cueto take the mound and, as he normally does in day games, dominate. Cueto threw 8 innings of 3 hit, 2 run ball, walking none and striking out 8. Todd Frazier helped out with his 17th Sinatra in a 2 for 3 game. To his credit, Xavier Paul helped out with his first HR as a Red...AND MIGUEL CAIRO HIT HIS FIRST HOMER OF THE SEASON!

The second game was a disappointment from the pitching side, but the bats did their best to help mitigate a potential loss to the Cubs. Ryan Ludwick was Studwick, again, tonight, hitting his 24th and 25th Studdies while driving in 3 runs...AND MIGUEL CAIRO HIT HIS SECOND TRIPLE OF THE SEASON!

A solid turnout today by you, we, our RR compadres. angeeh, sexsalad, CommiePuddin, and Cy Schourek were around throughout both games, and even the venerable Charlie Scrabbles made a gamethread cameo late in game 2. Today's honoree, however, is the finest muffins, a valued member of the RR community for quite sometime now. Thanks for kickin' it with us today, TFM.

The first game got off to a rather inauspicious start, as Johnny Cueto allowed a first inning, two-run HR to Alfonso Soriano. Cueto entered today's game with a 1.55 ERA in day games, and this was certain a shock to the system. No matter, however, as the Reds picked him up. Todd Frazier started the 2nd with a single, and Paul followed with a Stu Barnes to Right Center to tie things up. The Reds made more noise in the 4th, as both Frazier and Cairo (!!) hit solo shots to put the Reds up 4-2. Bruce tripled in the 8th and scored on Frazier's sac fly, and although Aroldis Chapman struggled a bit in the 9th (and allowed a run), the Reds closed out at rather mundane 5-3 win.

Todd Redmond got the start for this one, called up as the 26th roster addition due to the doubleheader. Needless to say, Todd's start didn't go very well. Redmond got out of the first inning unscathed after a large pitch-count, but Brett Jackson took him deep in the top of the second to put the Cubs up 1-0. Studwick promptly tied things up for the good guys in the bottom of the 2nd, but the Cubs broke things open in the 4th with an RBI single by Anthony Rizzo, an RBI double by Starlin Castro, and a Bryan LaHair fielder's choice, and when the smoke cleared, the Cubs had chased Redmond and held a 4-1 lead. A 5th inning Luis Valbuena double plated Cardenas for the 5th Cubs run, and although the Reds scraped one back in the bottom of the 5th on a Chris Heisey single, the Cubs piled on again in the 6th with a Castro triple, LaHair single, and Cardenas double putting them up 8-2.

Credit is due to the Reds, however, as they faced a large deficit after a very long day and still battled to the end. An RBI single by Frazier and an RBI double by Scott Rolen in the 6th began the comeback, putting the Reds within striking distance at 8-4, and a Studdy-honk in the 7th put it at 8-6. Jay Bruce singled in the 8th and later scored after a triple by the resurgent (!!) Miguel Cairo to make it 8-7. Logan Ondrusek, unfortunately, continued his late-season struggles, allowing a solo HR to DeJesus, and the Reds couldn't strike back again, losing 9-7.

Fangraphs game-charts after the jump. 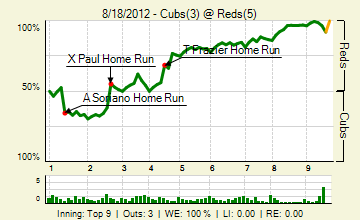 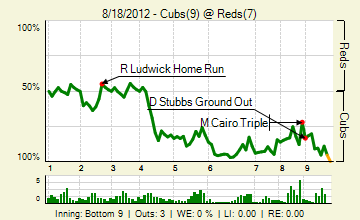 · The Reds and the Cubs scored the same amount of runs over both games, and though the Reds managed to split, it still feels like a loss. That said, as one of our faithful RR's noted, the Reds picked up half a game in the standings and reduced their magic number by 2. Not bad for a Saturday.

· Watch this and try not to crap your pants. If you've finished unscathed and thought it was rad, I suggest you track down this.

· Mat Latos will take the hill vs. the Cubs tomorrow at 1:10 ET as the Reds look to win the series. It's the Cubs, man. We've got to win.

· Tunes time, folks. This one will get ya up and dancing, and this one will blow you away. (P.S. I was in the audience for the second one!)