I Get it Now! The Reds Traded Travis Wood So They Could Beat up on Him Every Year! Reds defeat Cubs, 7-3.

Share All sharing options for: I Get it Now! The Reds Traded Travis Wood So They Could Beat up on Him Every Year! Reds defeat Cubs, 7-3.

There was lots of kicking of the tail tonight by our Reds, with Ryan Ludwick, Jay Bruce, and Drew Stubbs all pitching in to kick some. With that said, Roy Frazier gets the nod this evening, as his 2 for 4 night featured a superhonker, 2 RBI, 2 runs scored, and continued solid defense at 1B. His season OPS now sits at .889, and if voters overlook him as being the best rookie in the NL this year, they're just domb. Domb, I tell you. Morans even.

Lots of awesomesauce in the thread tonight led to well over 800 comments, and lots of you were around to participate. Our very own thread-leader Emeritus stopped by earlier than usual tonight, however, and therefore Madville gets the nod this evening. His band in the '80s played a reggae version of my favorite Stones song. That should win by itself, but the fact that Mads is the coolest thing since sliced bread was stored in the freezer puts it over the top.

Good to see ya around these parts, buddy. 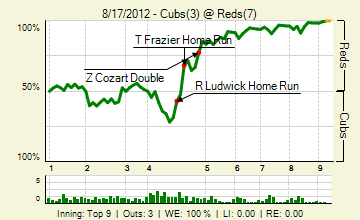