Homer is Still a Bad Name for a Pitcher. Mets Hammer Bailey, Reds 8-4.

Share All sharing options for: Homer is Still a Bad Name for a Pitcher. Mets Hammer Bailey, Reds 8-4.

Jay Bruce truly appears to be hitting his stride again after a prolonged slump. While he didn't continue his homer streak into a 4th consecutive game, he did manage 2 doubles and an RBI. If Bruce manages to get hot, Votto comes back, and Rolen is successfully duct taped together, this team can manage any possible regression by Frazier or Ludwick and still dominate. That's heartening, is it not?

That was about it, unfortunately.

Despite the lackluster play, tonight's threads were pretty solid. SaltyBalls McGee graced us with his (their?) presence, the finest muffins filled us in on what sounded like a delightful dinner, Yossarian took existentialism (or lack thereof) to some strange land, we all debated the merits of an offseason with either Youkilis, Swisher, or Luddy, and we all though of our favorite beer related songs.

The honor, however, goes to CommiePuddin, who was totally on point tonight from start to finish. Dropping Dana Carvey references never hurts your chances, by the way. 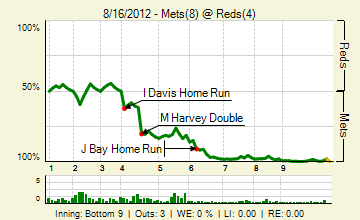