Mike Leake tossed a complete game gem tonight, allowing only 4 hits and 1 earned run while striking out 4 and walking none. Leake had struggle a bit of late, allowing 20 ER in his last 5 starts (26 innings), but he was hot early and maintained his dominance throughout, needing just 111 pitches to finish it out.

Scott Rolen, Todd Frazier, and Jay Bruce all honked wangers tonight, each of the rally-killing variety. Rolen and Frazier went back to back in the 4th off of Dickey, while Bruce homered in his 3rd straight game off of Dickey in the 6th. Zack Cozart had a few doubles and walked, too, looking a lot like a leadoff hitter in the process. Good on ya, boys.

It was alt-ego night tonight, as Broxy4AllStarz and AI Yellon stopped by to grace us with their presence, even coaxing that vixen Raven Riley out for a comment or two.

When the Reds win like they're winning, who knows who will show up? As we inch towards the NL Central crown, we may even see the likes of 'tHan, obcEwok, Farneyismycopilot, Ash, or even nycredsfan stop by. Wouldn't that be nice? We'll see if the Reds can oblige. 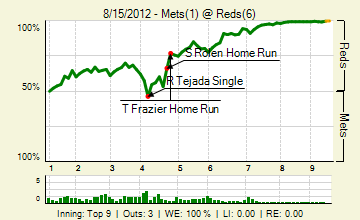