Share All sharing options for: Who's the King of New York? Jay Hova, of Course! Reds defeat Mets, 3-0.

Jay Bruce and his walk-off, three-run He-Man get the nod tonight, and I'm damn happy for him. Bruce was 2 for 5 on the night with his HR and a double, and so far has gone 3 for 9 with 2 HR, 2B, and 5 RBI since his Dusty-approved 2 game hiatus. Worth noting of course, since I'm noting it, is that both of those HRs came against Left-handed pitchers. If Bruce is heating up and seeing lefties better down the stretch, then hold on to your jock straps.

Fist bumps and hugs are in order for Mat Latos, who not only pitched well in his own right, but also watched the offense continually struggle and still came out throwing a gem. On the evening, Latos went 7 shutout innings, allowing only 5 hits and 2 walks while striking out 5. Check his splits, amigos and amigas, and once you get past April, tell me what you think. That's why Walt traded what he traded.

First and foremost, on behalf of Red Reporters across the globe, I want to give a big, heartfelt tip of the cap and smile to supergrover, as I'm positively certain that this is the kind of game he loved watching. I'd like to think he had a great view of this one and had a big smile on his face as he watched Nuxy call the walk-off. We miss ya, buddy.

Our very esteemed (yet rarely seen) colleague thevole gets the nod tonight, as he stopped by, kerhyucked it up with us, and let everyone in on the new, remastered Zappa albums that we can track down. You bring that kind of effort and knowledge (and even a picture of the infamous nycredsfan), and you get the nod.

Good to see you around again, voley. I look forward to some solid gamethreads down the stretch as the Reds motor towards the NL Central crown. 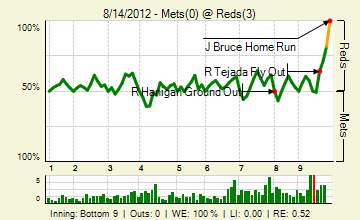