Johnny Cueto dominated the Cubs in a way you'd expect a pitcher with his talents to dominate a lineup with the Cubs', umm, "talents." Cueto's day ended after 8 innings today, and he left having tossed a gem: 0 runs, 3 hits, 3 Ks, 2 BB, on 113 pitches, and he contributed at the plate for good measure, going 1 for 2 with a sacrifice bunt. That's domination, amigos and amigas, and it's to the point where we are no longer surprised to see it happen. It's safe to say that if the only two pitchers used in a Reds game are Cueto and Aroldis Chapman, the other team never really had a chance.

Honorable mention is due to Jay Bruce, who came off sabbatical to launch his 22nd homer of the season, as well as Ryan Ludwick, who continued his career renaissance with his 21st blast of the season. Here's a topic of conversation: who will (and, who should) finish higher in this season's MVP voting...Votto, or Ludwick? 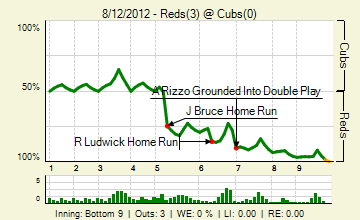