I could (and probably should) give this to Ryan Ludwick, who had a hell of a game (3 for 5, 4 runs, HR, BB, 2 RBI), but I'm going another route. Aroldis Chapman, to whom I have not bestowed the JNMHSotG before, gets the nod as he picked up a 4 out save, striking out 3 of the batters he faced in the process. The pitching has looked quite shaky of late, even during the latter stages of the win streak (both by the starters and the bullpen), but the one constant has been that Chappy has been utterly dominant. Today wove a similar story, as Homer struggled and the bullpen failed to put out fires despite the strong winds keeping all balls in the park.

Props to Ludwick, of course, but also to Todd Frazier, who went 3 for 4 with 4 RBI, BB, and a run scored. The two big bats in the middle of the order carried us through a grind-it-out divisional game late in the season...and they weren't Votto and Bruce.

And, of course, I can't fail to mention the Cubs defense (or lack thereof). The baby bears contributed with 5 errors, a passed ball, 5 walks, and numerous other misplayed balls. To call that game ugly would be an insult to ugly things; it was downright comically grotesque. 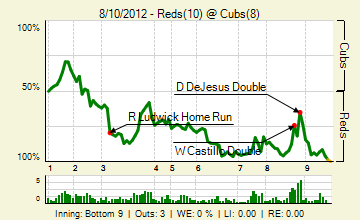