Share All sharing options for: And the Beat Goes On...Ludwick-Lead Reds defeat Padres, 6-4.

Who else? Ryan Ludwick homered and drove in 4 runs (again), and gets the nod (again) for the JNMHSotG (again). This guy is a wrecking ball, and I'm beginning to think it's a shame that the rest of the Reds' sluggers aren't healthy at the same time he's crunching. Luddy is materializing as exactly the RH cleanup bat envisioned by Walt and Dusty, and I'm absolutely certain he's the reason why the Reds passed on trade deadline OF options. Remember how last night I compared Ludwick's season OPS to Carlos Beltran's? Welp, now it stands at .888 to .891. Luddy's lurking, Carlos. Lud uh, Lud uh...Luduh Luduh Luduh Luduh!!!

Honorable mention to Zack Cozart, who led off with his 11th "MVP/GG" of the season; Drew Stubbs, who was 2 for 3 with a BB and 2 runs scored; and Johnny Broxville, who tossed a spotless inning (with a K) in his Reds debut. 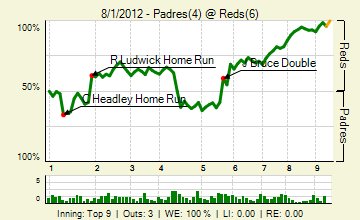