Just a few years ago, Broxton was arguably the best reliever in baseball. While until yesterday he was Kansas City's closer, he's just not anymore. But is he still good? Let's look at his numbers:

When he was elite, Broxton struck everyone out, induced more than his share of ground balls, and kept his walks under control. That was pretty much the story from the time he broke in through 2009, with 2009 being his best season. In 2010, however, he slipped from his perch as best closer in baseball. Though still effective, he lost an edge on strikeouts while seeing his walk rates climb into dangerous territory.

In 2011, Broxton threw only in April before being sidelined with a bone spur. He rested it for a month, tried to return, but was shut down again by the end of June with renewed discomfort. He ultimately had surgery in September 2011 to file down the bone spur and remove loose bodies in his elbow, rehabbed in the offseason, and signed with the Royals. He's been effective this year in the closer role, but despite being healthy he has not seen his strikeout numbers return to anything like they were before his issues with the bone spur. As a result, his component ERA estimators--FIP, xFIP, SIERA--all show concern about how well he's actually been throwing the baseball this year. It's less obvious why there's such a huge swing between his ERA and these other numbers (his BABIP is actually a tad high at 0.321), but a) anything can happen in a 36-inning sample, and b) the 81% LOB% probably has something to do with it.

His projections for the rest of the season (ZiPS and THT Forecasts' Oliver) have him in the 3.5-3.9 ERA range, which is pretty much in line with his peripherals this year. I think that's where we should expect him to be with the Reds.

Let's take a look at some scouting (ish) data and try to understand what has happened to this once great pitcher. First, here's a general profile of his velocity and pitch selection over time:

(I should note that all pitchf/x data, mostly, is taken from the excellent BrooksBaseball.net)

The thing that jumped out at me is how different his repertoire is this year compared to prior years. He's started using a curveball this year (very rarely), which was never a pitch that he'd used before now. He's also apparently abandoned the change-up, and (though I always worry about sinker vs. four-seam fastball classification) seems to have started using his sinker far more this year than last.

The other thing, of course, is that his velocity is down. It peaked in 2009, his best season, but took a pretty big hit in 2010 and then was down further in 2011. I was surprised to see as much of a drop from 2009-2010 as there was, but given his elbow issues in 2011 it's not surprising to see that be his low point. Here's a graph showing the velocity changes from FanGraphs: 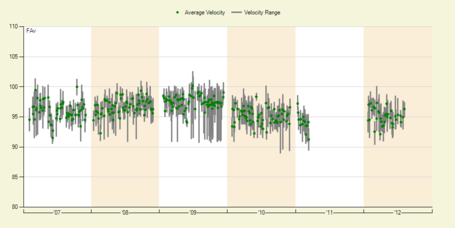 The biggest point here is that his velocity increased throughout 2008 and peaked in 2009, but hasn't been the same since. Also note that his last few appearances before going on the DL last year were really weak. I don't know if we should make anything of what looks like a downward trend in his velocity this year or not. But Broxton's fastball velocity seems like a good correlate (at least) with performance.

Here are a further look at the change in his pitch repertoire.

(Sorry it's so small, but you should be able to click on it for a bigger version, or just go to BrooksBaseball to see it yourself)

In 2009, he threw really hard. Against righties (right graph), you were either getting 98 mph heat or an 89-mph knee-buckling slider. Against lefties (left graph), he also mixed in a few sinkers and some change-ups, along with the sliders and fastballs.

If you compare the Y-axis on this vs. the prior graphs, you can see that his fastball velocity is down. And you can see the missing change-ups (blue). The thing that really surprised me is that he's using the curveball against lefties instead of the change--most of the time, curveballs have a split that favors their use against same-handed batters. Therefore, I find it almost shocking to see him using it so often against lefties. This isn't a case of misclassified pitches either--those curveballs are exactly where they should be in terms of both velocity and horizontal movement. It's weird. But it's also only 14 total pitches, so I probably shouldn't get too worked up about it.

Finally, with warnings about small sample sizes, let's look at effectiveness of his fastball and slider (since those are, by far, his most common pitches) over the past few years:

I don't see a lot of difference here with his fastball results. Instead, the striking thing is what has happened is that his slider has lost its effectiveness. In his elite days, it was a pitch that resulted in whiffs more than a quarter of the time...and when they did hit it, batters would pound it into the dirt. This year, while I can't say whether the sample is large enough to be of predictive (176 sliders), but he's only gotten swings and misses 13% of the time on that pitch (despite similar swing rates--57% in 2012 vs. 59% in 2010)! Now, a slider's effectiveness can depend on the fastball, so it could be that the loss of fastball velocity means the slider doesn't fool batters as much. But I think he may just not be able to throw that pitch as well as he has in the past. That scares me to death, because it's always been his big out pitch.

Does Broxton improve the Reds' staff?

This year's peripherals and rest of year projections all point to Broxton posting a 3.5-3.95ish ERA over the rest of the year. I think that's about right. Even with a slider that now grades out as average (at best), he throws hard enough that I think he can still be reasonably effective. A 3.75 ERA is right around average for a bullpen arm, and that's what I think Broxton is at this point. He might also add some mojo to the bullpen, and there's always a chance that he can rediscover his slider over the last two months and be dominant. ::shrug::

So are the Reds better now with him? It's not overwhelming, but yes, probably. He is certainly an improvement on Logan Ondrusek (4.49 FIP, 5.22 xFIP), who I have been fretting over in my series previews all season. And Broxton's history as a closer gives him a clear bump over Ondrusek in the bullpen pecking order, so I think we'll see Broxton get those high leverage situations against right-handers that Ondrusek has owned. That's a good thing, because Ondrusek is a catastrophe waiting to happen.

But has Broxton been better this season than Jose Arredondo (4.15 FIP, 3.91 xFIP)? What about Alfredo Simon (3.03 FIP, 3.90 xFIP)? Sam LeCure (3.65 FIP, 3.60 xFIP)? When you factor in the fact that he's playing against teams with DH's, and facing them in the 9th when teams use their best pinch hitters, then yeah, I think you probably still go with Broxton. And his history of being awesome probably gives him another bump. But it's not a slam dunk, and would be a mistake to expect that he's anything like the shut down reliever that he used to be.

What about the price the Reds paid?

I'm not a prospect junkie, and follow Reds' prospects far less than I should. In general, I don't get very excited about prospects until they are either a) on top-100 lists, or b) called up to the majors. That's especially true with pitchers. Pitchers break, and they disappoint, and their numbers can mislead (when their numbers look stellar but the scouts are skeptical, it's usually the scouts that are right).

Here's what I know, though: J.C. Sulbaran entered the season ranked everywhere from 6th (Kevin Goldstein; 3-Star) to 12th (John Sickels, Grade C) on Reds prospect lists. Since then, he has struggled a bit in AA as a 22-year old, returning to the inflated walk rates of pre-2011 and giving up a good number of home runs. But he's still striking guys out, and still could be something. This was a good quote from John Sickels yesterday on him:

Sulbaran is a 6-2, 220 pounder, born November 9, 1989. He's had significant problems keeping his mechanics in line at times, but when everything is working well he has a 90-95 MPH fastball. His curve varies between plus and below average, depending on the day, and his changeup is likewise inconsistent. If you see Sulbaran on a good day, he looks like a prototype number three starter, talent reflected in his strikeout rate. If you see him on a bad day, you wonder how he'll get out of Double-A.

Donnie Joseph is a lefty relief prospect who did appear on Kevin Goldstein's organization list at #14 (not listed, but maybe 2 star?) and was listed as an "other" on Sickels' list (again, not listed, but maybe C?). Throws in the low-90's with a good slider, and this year has shown improved control to complement his continued good strikeout numbers. I like him, and he sure looks enticing now that Bill Bray is back on the DL. I'm not sure if he'd be anything more than a mid-inning LOOGY, but you need a guy like that and he might be decent.

...so I like both of these guys. But at the same time, I don't think either can be thought of as an essential cog in the Reds team moving forward. They're depth, they have enough upside that you can hope they might contribute some, and therefore they have some value. But they're also pitching prospects, and not elite ones. And Joseph is just a relief prospect. I can't get worked up about that.

Is it fair value? Most of the work on prospect trade values (e.g. here and here) has to do with guys on top-100 lists. These guys are really no where close to making such a list. This study indicates a pitcher at the bottom edge of a top-100 list has somewhere around $8 M in surplus trade value (value above the salary you pay). Where do we place Sulbaran and Joseph, then? A quarter of that? A tenth? It has to be a major discount. Ultimately, we're talking about players who have a chance to be something, but more likely that not, will not be. They don't have a lot of value.

So how much is Broxton worth? Well, the projections have him at ~0.25 WAR the rest of the way, which is worth about $1.25 million. He's getting paid $4 M this season, and I'm guessing the Reds pick up a third of that, which is $1.3 M. So he's being paid about his value. So from that perspective, the Reds overpaid, because any value in return is too much. But the counter, of course, is that if the Reds now stand to a better chance to make the playoffs and thus earn more in revenue this year and in coming years, then this math doesn't work anymore. On top of that, if you have money to spend, you probably have to pay an "opportunity cost" to acquire rights to pay the player at this point in the season, because there aren't many (any?) good free agents available right now.

Ultimately, I don't particularly like this deal, not so much because of the prospects we gave up but because I worry about whether Broxton can continue to be effective without a good slider. I just have to trust that the Reds' scouts are right in thinking that Broxton can make his pitches work well enough to get batters out over the rest of the year. We'll see. The guy's a Red now, and so I will root for him because he wears the uniform.