Red Reporter Caption/Interpretation Contest: Put a Sheen on it.

Share All sharing options for: Red Reporter Caption/Interpretation Contest: Put a Sheen on it.

I'm still trying to run these every Saturday, but I wanted to yield the floor to Chuck Scrabbles' magnum opus, which - let's be honest - was a million times better than J.D. Salinger's attempt.

Maybe we've already milked Charlie Sheen's recent appearance at PetCo - which included shagging balls in Reds' warm-up garb - for all it's worth. But that doesn't mean we can't keep milking it. It's just that nothing will come out. I think this is starting to sound like a gross Sheen-style extended metaphor.

In any case, let's take a look at your text for the above photo in the thread.

Make the jump to find last weekend's winner. A few more of these and we'll be ready for a Tournament of Captions and a prize to the best of the best. 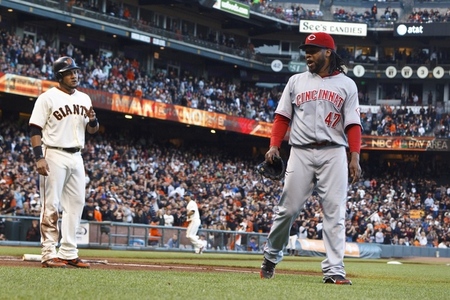 "Tryn'a hit on me like you Chris Brown and I'm Rihanna
But I'll beat you like I was Drake, defendin' her honor
You a Kansas City reject, and I'm a Cy Young contender
You sound like you milky in Cleveland, but I'm the 1 percenter
It says San Fran on your hat, Giant on your jersey
But I'm the titan on the mound, showin' you no mercy
I hate Ashbury, reppin' my city
It's the Queen, you dead like Freddie Mercury."