Clear. Winds blowing out to right field at 0-10 m.p.h. Game time temperature around 65.

A lot of emotions wrapped up in this one. Independence Day. Facing the Big Guy again. Not wanting to fall into second place behind the Pirates (they won today).

236 years a go today, the Second Continental Congress said, "Get behind me, Britain." 63 years a go, Ed Armbrister - a critical bit player in Big Red Machine history - was born. Eight years a go, Aaron Harang made a July 4 start in his first full season with the Reds, going 6 strong and giving up only one earned run.

Mike Leake and Aaron Harang were ships passing in the night during 2010. Harang was on his way out during Leake's rookie year. In a certain, very convoluted, way, Leake is pitching in Harang's spot - as Cueto, Bailey, Arroyo were all here before and Latos came later. Which reminds me that Harang, one-time member of the Padres, has shared a rotation with all five of the Reds' current starters.

Leake, like Harang over the past season and half, is having a changing of fortunes. He's gone further in each of his last four starts, culminating in a complete game last time around against the Giants. Tonight, he's due to throw a 10.2 inning shutout. 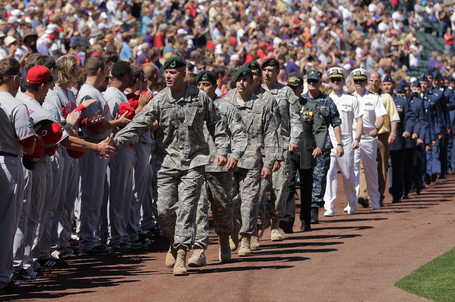