OK, Luddy. It's high time I gave you a public apology. You see, it wasn't that I didn't like you as a person, and it really wasn't that I thought you were a complete waste of money and effort; rather, it was that I thought you were miscast and would ultimately be misused. I was pining for a prototypical OBP leadoff hitter (like David DeJesus), or an "actual" impact middle-of-the-order bat like Carlos Beltran. When you were signed, I was mad...not necessarily mad at you, but mad at the Reds themselves for thinking that you were the answer to that big bat question. I thought you were destined to be the next Jonny Gomes: good at what you were good at but asked to do too much, ultimately disappointing.

You'd struggled for two years. You'd struggled for multiple teams, both on the road and at home. You were a Cardinal, fer Pete's sake. It seemed like we'd settled for you after watching other teams reach for better players. To call it frustrating for Reds fans would be an understatement, even for those fans who thought there was a chance you'd rebound.

I was wrong. I'm happy to be wrong. You've kicked ass, Ryan Ludwick, and I'm happy as hell that you are. You're the reason we didn't have to gut our farm system today in order to stay in the NL Central race. Thanks, man.

Ludwick's night featured an RBI single in the 1st, a 3 run HR, and a walk. Brandon Phillips helped out with the go-ahead HR in the 7th, Todd Frazier hit a no-doubt 2 run blast, and Sam LeCure, Sean Marshall, and Aroldis Chapman pitched 5.1 scoreless innings out of the bullpen to close it out. 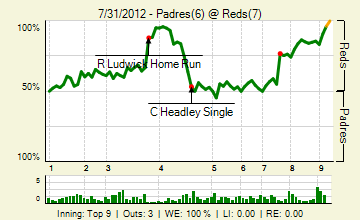