Jay Bruce gets the nod, as he was 2 for 3 with 2 runs scored, a solo wanger honked, and 2 walks. After his homer at Coors and tonight's performance, Reds nation is eagerly anticipating another hot streak from Young Hova. Drew Stubbs deserves mention, too, as he continued his Player of the Week level performance with a 2 for 5 night that included a solo homer, SB, and 2 runs scored. His hot streak tonight finally got his season OPS over .700, too. 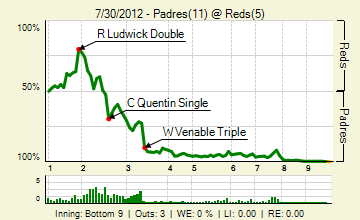