Share All sharing options for: Series Preview: Padres vs. Reds 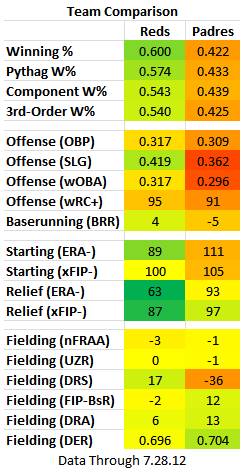 The Reds' tour of the worst teams in the National League continues today as the Reds return to Cincinnati to host the Padres. The Reds have been doing what good teams are supposed to do against bad teams--save for the 0.500 Diamondbacks, all 10 of these games have been against below-average--if not atrocious--teams. But that doesn't mean it hasn't been impressive, or a lot of fun to watch. The Reds have won by one run twice, two runs four times, and by three or more runs three times during the 10--game winning streak. Going back to July 6th, the Reds are 17-2, only losing those two games against the Diamondbacks. They've outscored opposing teams 90-53 in that span (4.7 R/G vs. 2.8 R/G--they're definitely winning with pitching and defense), which makes for a .742 Pythagorean winning percentage. They've been cruising.

And which team was the one that set off the Reds' current run? That would be the San Diego Padres, who the Reds beat in their final three games at PETCO. The Padres have had a bad season. Their offense has been poor, as seems typical, even after park adjustments. But their starting pitching, which most years seems strong, has been uncharacteristically shaky all year, and their bullpen is a far cry from what we're used to seeing in San Diego. Add to that approximately average (I think?) fielding and you have a bad team.

That said, there's some intriguing talent on this team. That's especially true for Reds fans, because three of the four players the Reds sent in the Mat Latos deal are currently playing and performing for the Padres. I'm sure those three--Volquez, Grandal, and Alonso--are all itching to show their former club what they can do.

Waiting in the wings is a big series this weekend against the Pirates. The Reds don't get a day off before facing them. I can't decide if that's a good or bad thing. Let's hope for no extra-innings games against the Padres. 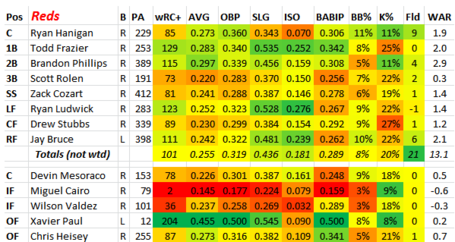 Todd Frazier is tied for first among NL Rookie Hitters at 1.8 WAR. I have him at 2.0 WAR because I'm using different fielding data (more sources), but the point is that he's right there with Bryce Harper and Andrelton Simmons. All are behind Wade Miley, Michael Fiers, and Lance Lynn among all rookies, but Todd is haivng a very nice season.

Ryan Ludwick continues to surge, and now features a .323 OBP to go with his already excellent power numbers. 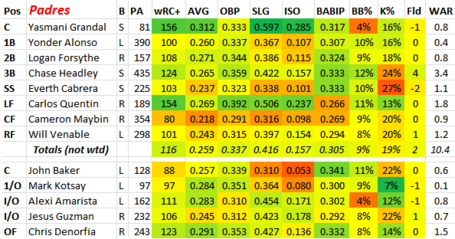 Since getting called up for good, Yasmani Grandal has been on fire. He is easily winning the "which former Reds catching farmhand will have more value in 2012" race, despite having half the PA's of Devin Mesoraco. The question with Grandal is his fielding, but those who compared him to Mickey Tettleton when he was drafted are looking smart right now. I'm sure he'll cool down--note his 4% walk rate--but I've always liked the guy and it's nice to see him performing. Yonder Alonso is doing what his critics warned might happen--he's hitting ok and getting on base, but has shown very little power for a 1B, even by PETCO standards.

Carlos Quentin is back in the lineup after missing time with an injury, and he's been hitting well. Chase Headley is also a quality player, though his name has been hot in trade discussions since the past offseason--it's not impossible that he might disappear before the end of our series. His replacement is probably Jedd Gyorko, who is hitting .333/.381/.586 in AAA. This entire lineup, sans the disaster that Cameron Maybin has been post-extension, seems surprisingly good at getting on base, and they have some power threats. This is not a fall-over-dead lineup, despite what their season line would indicate. 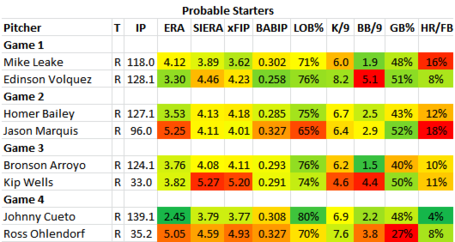 Edinson Volquez is having a nice little bounce-back season. He's still walking way too many, though, and his peripherals are pretty much exactly where they were last year when he was with the REds. I will always love his combination of strikeouts and ground balls, but he has to find that plate.

Jason Marquis was picked up off the scrap heap after the Twins cut him loose, and San Diego may be the only place he can really be expected to pitch well. I think he can pitch in San Diego, though, and like him better than his ERA. Kip Wells is the opposite--he's got a 1:1 K/BB ratio, and that's not going to cut it no matter what you do with your ground balls. Between Wells and Ohlendorf, the Reds have a great chance to gain some momentum before the Pirates come to town. 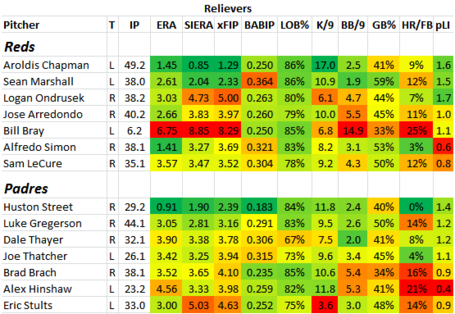 Huston Street missed time with injury, but has been phenomenal since returning. And Luke Gregerson seems to have figured out how to get strikeouts again after a big drop-off last year. They make a formidable 1-2 at the back of the pen. Aside from that, this pen has been pretty ordinary. Not bad, but not good either.