It's hard not to give the nod to Mat Latos today. After giving up a first inning two-run home run to a rookie he'd never faced before, the big right-hander settled down and threw a gem. Latos finished 8 IP with 8 K, 4 H, and 3 BB, routinely touching 96 mph while looking firmly in command the entire time.

Latos had a lot of help, too. In fact, every Reds position player that played had a hit except for Todd Frazier-Madville. I do think, however, that special due should be given to the players standing directly in the middle of the trade deadline rumors...namely Drew Stubbs, Chris Heisey, Zack Cozart, and Miguel Cairo. The Reds have been targeting, according to which talking/blogging heads you'd like to believe, a "leadoff type," a LH bench bat, and a CF, and each of those four guys stands to lose serious playing time - if not a spot in the Reds organization altogether - should someone be acquired. If this was their last hurrah, they went out swinging. Heisey was 2 for 4 with a triple, double, and 2 runs scored; Stubbs was 1 for 3 with a HR, BB, 2 runs scored, SB, and 3 RBI; Cozart was 2 for 5 with a double and 2 runs scored; and Cairo was 1 for 3 with 2 RBI. They're increasing their trade value, winning, and making Walt's job that much harder as the deadline looms. 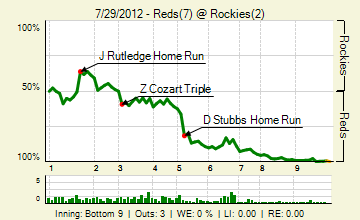