I lied last week. Let's try one more of these before the Caption Playoffs. I found a pretty good one and couldn't resist. And we're still ironing out the details of the contest. And six is an even number.

The Reds are in the middle of an eight game win-streak, so Dusty Baker has attracted some hangers-on, including Colorado manager Jim Tracy - who is shadowing him as part of an MLB mentoring program. They like to point at things for him to look at. They like to assure him that the Pirates will eventually stop also winning.

What are they saying, doing? What is their reason for being? Post your captions in the thread.

Last week's winner is a just a jump away. 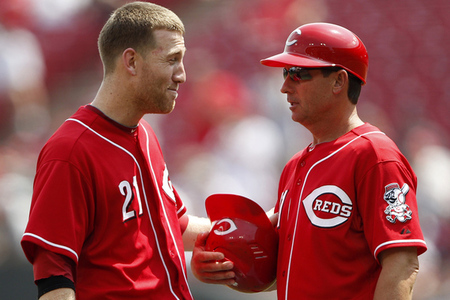 "And then Rolen was like, 'I'm keeping my starting job even after Votto gets healthy!'"