Ryan Ludwick continued his 34 year old renaissance, tonight going 2 for 3 with a walk, double, 2 runs scored, and an RBI. Thankfully, as Jay Bruce has cooled off, Luddy has heated up, and he's now firmly entrenched as, SSS aside, the Reds second most dangerous bat. Ideally, this will help Walt prioritize at the upcoming deadline, as we may well have found the LF we've been looking for since the Dunn trade.

Props are due to Bronson Arroyo as well, as the veteran righty evened his W/L record at 6-6 with 6.2 IP of shutout baseball. Ryan Hanigan pitched in with a 2 for 3 night (with a BB), and Arolids Chapman was dominant in the 9th for the save, touching 101 mph with 3 Chapmans. 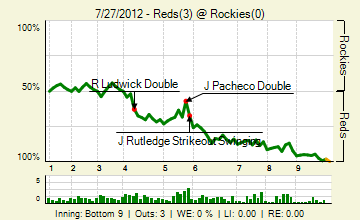