Share All sharing options for: Series Preview: Reds at Rockies 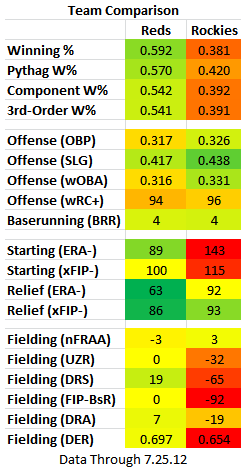 There is exactly one team in major league baseball with a record worse than that of the Houston Astros, and that's the Colorado Rockies. And it's the Rockies that the Reds face off with tonight. I always dread the annual trip to Coors Field, but this is again a nice opportunity for the Reds. They capitalized against the Astros, and I hope that can continue.

The Rockies are the hardest team to evaluate statistically, with the possible exception of their division rival Padres. Coors Field may not be what it used to be pre-humidor, but it's still a ridiculous hitting environment that makes it hard to judge hitting, pitching, and fielding statistics. All we can do is blanket adjustments across players--sometimes overall, and sometimes by individual component stats. All of the + or - numbers (wRC+, ERA-, xFIP-, etc) are park-adjusted, and that works fine if you're shooting for value estimates. But there's only so much that one can do if you're going for talent assessment.

In any case, despite the Rockies' nice looking offensive stats, wRC+ pegs them as a slightly below-average offense. As we'll see, most of their infield hasn't hit this year, but they still do have outstanding hitting talents on this team. Their bullpen has also been solid.

But their rotation has been an unmitigated disaster from the start. For a time, they were running with a four man rotation, though the most recent word I've seen is that they're trying a five man rotation with three hybrid middle reliever/long men in their bullpen that are set to pick up whenever their starters implode. They are carrying an extra reliever to handle the load. When your starters have been as bad as these have, you have to try experiments. I'm not sure that this one is crazy, either. 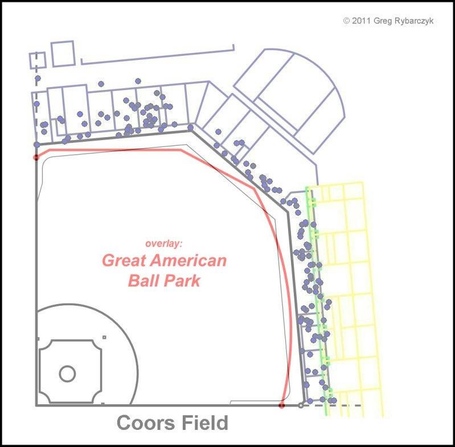 I love this image, because it shows what an odd place Denver is for baseball. Coors Field is one of the largest fields in baseball in terms of outfield square feet. And yet, despite the deep fences, it is among the best places in baseball to hit a home run. Arguably, however, the biggest problem at Coors is not the home run, but fact that the outfield is so huge that it is very hard for outfielders to prevent hits. On top of that, the poorer breaks on pitches thrown means that infields must contend with harder-hit balls than usual. As a result, the Rockies almost always have an above-average BABIP (0.318 this year) and BABIP-allowed (0.654 DER, which is 1-BABIP). This is one of the main reasons that I'm very reluctant to trust fielding statistics for Rockies teams, even after their park adjustments. But if you're going to look at any of these, look at things like nFRAA and UZR (they are park adjusted) before DER (which is worthless there). 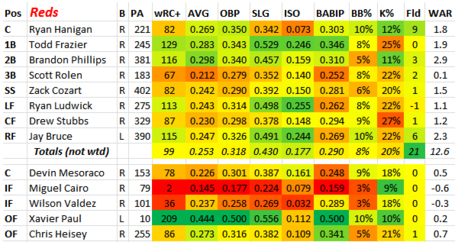 How about Xavier Paul's first 10 PA's? He was huge in the Astros series. It's nice to have a left-hander on the bench.

I wonder what happened to Chris Heisey's power this year?

The last time we faced the Rockies, Jordan Pacheco was starting at third base and DJ LeMahieu had just been called up. Those two have now traded roles, though neither has performed well. Josh Rutledge has come up and done a fine covering for the injured Troy Tulowitzki. And the player who has seen the biggest postiive jump on this team since our last meeting is Dexter Fowler. He's been killing it this season, and especially over the last two months. After his second-half surge last year, there were a lot of people wondering if he'd be able to continue mashing this year. Well, the answer is an unqualified yes through July.

Tyler Colvin has largely taken over the right field job with Todd Helton on the DL, with Michael Cuddyer taking over at first base. Colvin, formerly of the Cubs, is a guy that I've never really liked that much, but has long been a guy with good power and poor on base skills. That's very much his profile with the Rockies, but he's been excelling in the power department enough that his 4% BB rate hasn't mattered that much (so far).

Ramon Hernandez has struggled a bit with injuries this year, but has not hit after a good April. Wilin Rosario, on the other hand, while not much in the on-base department, has been a great source of power this year. Rosario was always supposed to take over the catching job late this season or early next anyway, and it might happen very quickly unless Ramon can turn it around. It's a shame, because I heart Ramon Hernandez.

Every single one of the Rockies' five starters are left-handed. I don't think I've ever seen that.

In any case, Drew Pomeranz was the big prize from the Ubaldo Jimenez trade last year, and has been decentish in limited time with the Rockies, considering the park. He scratched from his last start with arm soreness, but all indications are that he's still going to pitch tonight as of press time. He is arguably the Rockies' best prospect. Christian Friedrich, 24, is also a prospect, but more of a back end of the rotation kind of guy than Pomeranz. His strikeouts took a big dip when he was promoted to AA last year, but thus far he has rebounded this year in AAA and in his MLB debut. Jonathan Sanchez is just-acquired from the Kansas City Royals in a trade of struggling starters; the Rockies sent Jeremy Guthrie, their big off-season acquisition, in return for Sanchez. The story on Sanchez is the same as it was last year, just worse--he usually has no idea where the plate is, but he probably can be effective if he ever finds it.

Among the Reds' starters, the guy I'm most concerned about throwing in Denver is Bronson Arroyo. The high-altitude air has less of an effect on thrown balls in Denver than at lower altitudes, so the spin on a curve ball will cause less force to be applied to the baseball and thus reduce its break. A curve ball specialist like Arroyo seems most likely to be affected. I hate splits like this, because the sample is too small to mean anything. But it's consistent with my worries, so I'll mention it: Arroyo's third-worst OPS allowed among all parks is at Coors'. The only active stadium where he's thrown more poorly is in Philedelphia. 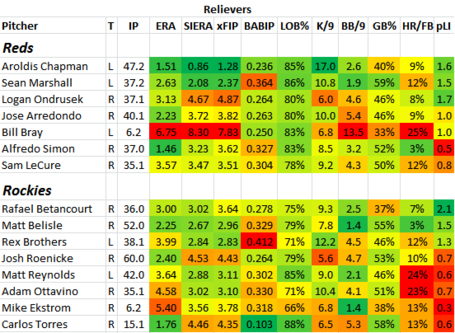 As bad as their rotation has been, the Rockies' bullpen has been pretty solid. Matt Belisle, while not the closer, has probably pitched the best of the group. But there's a lot of competition for that title, with Rex Brothers, Matt Reynolds, and Adam Ottavino all posting excellent peripheral numbers (even if their ERA isn't as good). Closer Rafael Betancourt's line is striking in that there's such a big skew between his SIERA and xFIP. Usually those numbers are far closer. I'm not sure what's driving that in his case.