Boring is as Boring Does...Until Drew Stubbs is Up At Bat. Reds defeat Astros, 5-3.

Share All sharing options for: Boring is as Boring Does...Until Drew Stubbs is Up At Bat. Reds defeat Astros, 5-3.

Drew Stubbs just keeps on Stubbin'. Stubbs entered today with a post-ASB line of .300/.364/.400, and he continued his hot hitting tonight with a 2 for 5, 3 RBI evening. Look, his defense has never been a question mark, and for all intents and purposes, neither has his position as a regular on the Reds. The reason he's been mentioned in trades is due to his manager's penchant for batting CFs at the top of the lineup, spots where he's struggled. The Reds need another LH bat (unless Xavier Paul continues what he's doing), and Stubbs has to know it; its admirable to see a guy who knows his job is on the line step up and perform, and that's exact what he's doing. Props, Stubby.

Honorable mentions are due to Paul, of course, who had a huge pinch hit double to leadoff the 9th inning rally; Jay Bruce, who was 2 for 4 with a BB and an RBI 2B in the 9th; Devin Mesoraco, who was 2 for 3 with a 2B (getting his OBP over the .300 level); and Homer Bailey, who struggled a bit, but also managed to toss 7 scoreless innings with 7 Ks. Sweeeeeeeeppp! 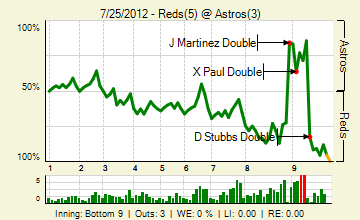