Drew Stubbs either really wants to be the Reds CF for the rest of this year and beyond, or he's trying to help the Reds' front office convince other teams that he's good enough to be a featured piece in a trade. Either way, he was the star tonight, going 3 for 4 with a walk, 2 singles, and the game winning Dunkaroo in the Top of the 9th off of former Red Coco Cordero.

Honorable mention is due to Xavier Paul, who went 3 for 5 with 2 RBI singles; Jay Bruce, who walked 3 times; Mike Leake, who tossed 8 innings of 2 run baseball with only one really regrettable pitch; and Zack Cozart, whose single off Coco in the 9th made Stubbs' dunk a double-dip. 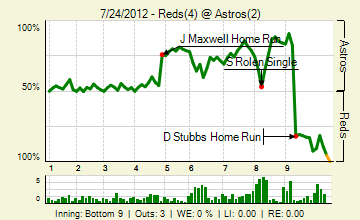