Brendan has already described Sunday's induction much better than I could. But I'll throw in my observations and poor photographs none the same, if you'll indulge me.

This was my second trip to Cooperstown, but my first in over a decade and my first for an induction weekend. With just about every shop devoted to baseball on the main drag, it felt a little like my own personal Epcot Center. After finally reaching Cooperstown from Binghamton, we took the pleasant stroll down to the Clark Sports Center for the ceremony 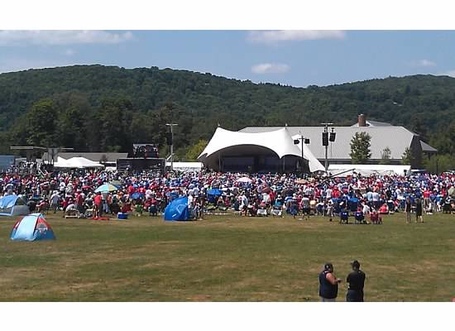 A gorgeous day, as I'm sure you saw on the broadcast. It was bright but not terribly hot. Still, sitting on large field with a bunch of strangers for over two hours is going to bore the pants off any toddler: 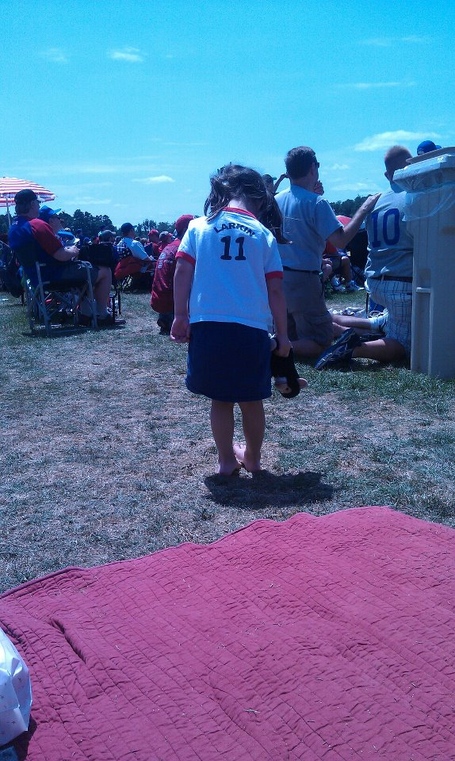 Perhaps foolishly, we took the girls into the Hall after some post-induction ice cream. About ten minutes into it, it was clear that our toddler wasn't going to tolerate any more baseball appreciation for the day. We zipped through the plaque room, but Barry's and Santo's weren't yet installed. I did see a small exhibit for Larkin, though: 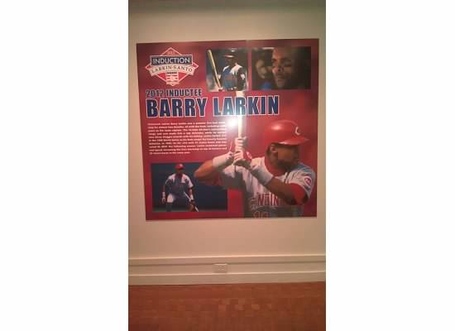 We returned the next morning to attend a smaller, indoors event called "Voices of the Game." Larkin, Tony Perez, and Billy Williams answered questions from a moderator and traded barbs. In one exchange, Larkin recalled Perez's tough love when Doggie asked him if "he could read it" after Larkin had made another out. Perez later clarified that he wanted to read the newspaper that the feeble-hitting rookie was using instead of a bat. Well, it was funny in the context of their stories. 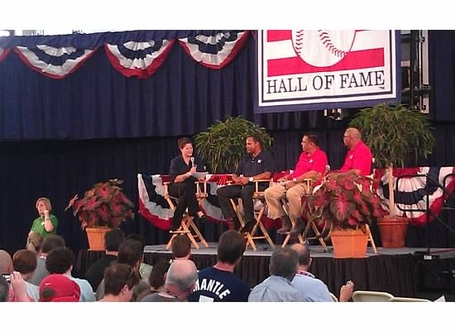 We then returned to the Hall to see a bit more of the museum. At long last, we got to see Barry's plaque: 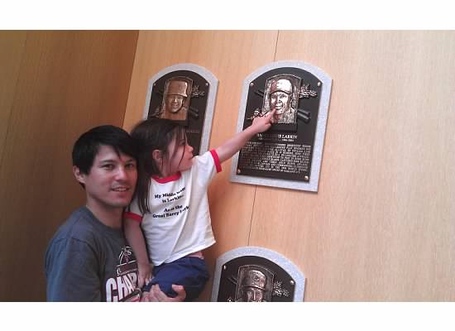 And there it was. Larkin's place in baseball history, permanently engraved. I sometimes wonder why this matters so much to me when I'm fully aware of all the voting flaws and misguided justifications that wrongfully keep some players out (and others in). The answer, at least in part, is what it means to the players. Larkin's induction speech was on the long side (which he admitted the next day), but it was also filled with a level of emotion and gratefulness that I'm not accustomed to seeing from him. And it's not just him - Eric Davis' tributes showed how much it means to those who played with Barry as well, particularly as they contended with the shadow of the Big Red Machine during their careers.

It was a long drive home, filled intermittently with rainstorms and crying from the back seat. But it was so, so worth it. Here's hoping that the next time I see this many Reds fans in New York is this October.