Share All sharing options for: Series Preview: Reds at Astros 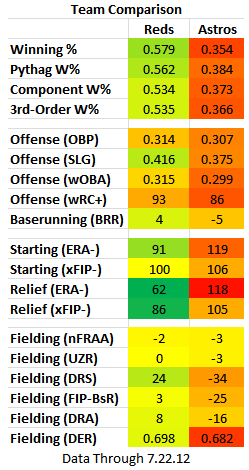 After a very successful 8-2 homestand, the Reds go on the road for a short 6-game road trip. Their first stop is Minute Maid Park to take on the Astros. While the Astros started the season prett ywell, they've gone 12-39 since May 26th, including 8- and 9-game losing streaks. And as of today, they're in the midst of a 7-game losing streak.
The team has just been awful in every way to this point. Their offense has stunk, their pitching has been bad (though note their starters' xFIP isn't disastrous), and even their fielding numbers are sub-par. This is quite simply a bad team, and they possess the worst record in baseball.

So, this presents quite a nice opportunity for the red-hot Reds. The Reds do face off against three Astros pitchers who have nice peripherals (at least), so I don't see this as a cake walk. But if the Reds' staff can pitch well, this is most definitely a winnable series. Hopefully they can gain a couple of games on the Pirates and Cardinals in the first half of the week.

The Astros present a pretty interesting armchair GM problem. Seriously, if you're running this team, what do you do? After trading J.A. Happ and Brett Myers, there's not much else on this team that makes for an attractive trading chip. It seems like their only real opportunity for talent acquisition would be to trade Wandy Rodriguez. But it's hard to trade the last good, non-slave wage player on your team... I'd normally say that they should go nuts in the amateur draft and international free agent markets for a few years, but the new CBA pretty much stifles that (yay for restricting options by which bad ballclubs can get better!!). It's a tough spot to be in.

I'm surprised that there's not any visible difference between LHB's and RHB's for home runs, because the most prominent feature of this park are the Crawfish Boxes in left field (see below). But, the relatively short fence across all of right field must be making up for it. Just don't hit the ball to straight-away center.

I'm not sure how differently this park plays with the roof on or off. I'm guessing, given that it's July, that we'll see the roof on during the game. 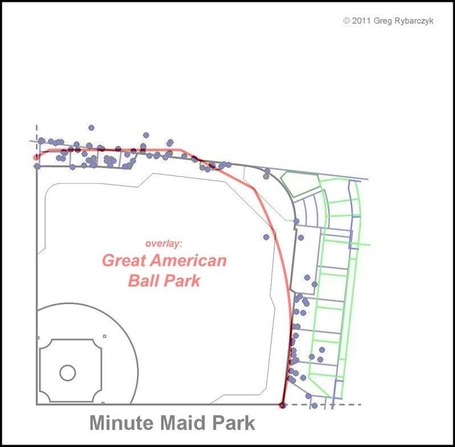 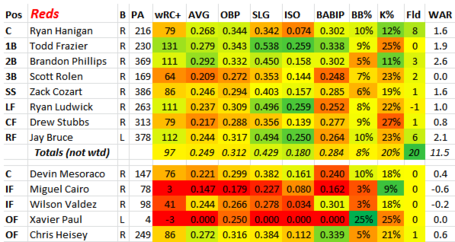 We've gotten to the point in Jay Bruce's slump, and Ryan Ludwick's rise, that the two have essentially identical run production on the season on a per-PA basis. The difference between them in WAR is a) playing time, and b) fielding. Bruce might not be hitting like we all wish he would, but the guy is still outstanding in right field.

Ryan Hanigan is starting to tail off a bit....but he's still posting a .344 OBP, which is best on the team (non-Joey Votto division). I know it'll never happen, but I'd love to see him hitting 9th with the pitcher 8th. Or, hell, bat him leadoff. His only offensive skill is getting on base, and it's wasted if you hit him in front of the pitcher. 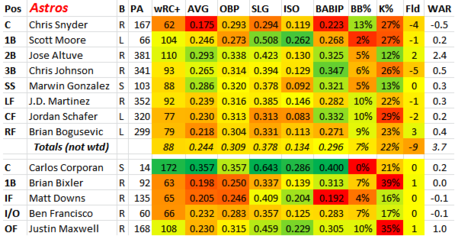 The shine might be starting to rub off Jose Altuve, but the guy continues to have a terrific sophomore season. We're starting to see his fielding numbers tick up, too--I think we'll see him in Houston for years to come. There's not much positive that you can say about the rest of this team. Scott Moore is the only other regular (against right-handers) with a wRC+ over 100 right now. He's a 28-year old in his 5th season in the majors with his third club, and has a combined .229/.271/.404 in 268 MLB PA's. His minor league numbers show good patience and modest power. You never know, but he looks to me like a AAAA player.

Ben Francisco is kind of interesting. Just picked up from the Blue Jays, and formerly of the Phillies, he's a guy who has always seemingly been stuck in a platoon situation, even when he gets to start. His career numbers show almost no platoon split (0.334 wOBA vs. LHP, 0.330 vs RHP), but maybe there's something in his swing that worries scouts. He is getting most of his starts this season, along with Justin Maxwell, against left-handed pitching.

You know about Wandy Rodriguez. He's still quite good. Lucas Harrell hasn't really been on my radar, but he looks to be one of these ground-ball specialists we see from time to time, a la Derek Lowe or Jake Westbrook. They get ground balls, but the rest of their pitching line isn't good....yet they get the job done. If the Astros infield defense was a bit better, Harrell might look pretty impressive. Chris Johnson isn't helping...

Bud Norris seems like a classic due-for-regression guy. He's basically putting up the same peripherals he always does: lots of strikeouts, but lots of walks and home runs. Last year, when he posted a 3.77 ERA in 186 innings, the biggest difference to his underlying numbers was a 3.4 bb/9. Now, that's quite a difference from a 4 bb/9. But not enough to inflate his ERA to 5.33 by itself. He does have elevated BABIP and HR/FB this season, so a lot of that might be luck (or whatever you call unlikely to be continued bad performance--I fully accept that a lot of what gets called "luck" could be skill-based...it's just a kind of skill that is unlikely to be perpetuated). It is worth noting, however, that he has seen his fastball velocity decline by one mph each of the last two years...so maybe some of this is real. 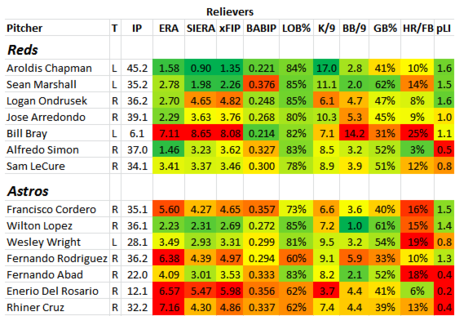 You might have missed it, but the Astros picked up Francisco Cordero last week in the J.A. Happ deal just prior to moving Brett Myers over the weekend to the White Sox. Those events have lead Coco to resuming his customary role as closer! Good for him. Unfortunately for the Astros, Cordero has been awful this year. He somehow managed to get his strikeout rate up a little bit from what he posted with the Reds last season, but in so doing he's seen a spike in his walk rate and (especially) a big drop in his ground ball rates. The "new" Cordero of last year got by via inducing ground balls and avoiding the walk. It's as if he tried to return to the old Cordero with Toronto, and he got pounded. We'll see what he does in Houston.

Wilton Lopez and Wesley Wright have also pitched well this year. Fernando Rodriguez has gotten a lot of innings in tough situations this year (pLI=1.3), but he's been horrible. I can't imagine that this will keep happening unless he makes a quick turnaround.