Share All sharing options for: Series Preview: Brewers vs. Reds 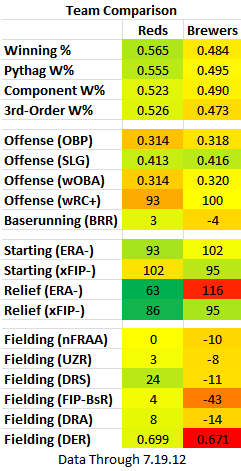 After splitting the series with the Diamondbacks, the Reds conclude their homestand by welcoming the Milwaukee Brewers. I haven't gone back and checked, but I'd guess that I've profiled the Brewers more than any other team this summer. They are a similar offensive team to the Reds (at least when the Reds are healthy), with good power but middling tendencies to get on base. Their rotation has struggled badly. And they are one of the worst fielding teams in the league according to every measure we have.

Overall, the Brewers are roughly a .500 team right now. Normally, I'd give the edge to the Reds, but without Votto I think they are pretty even with Cincinnati in talent level. 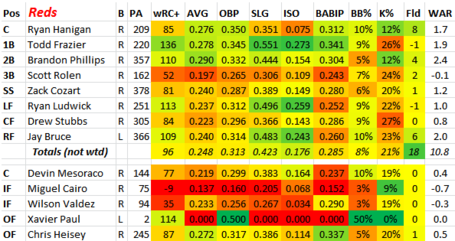 While the loss of Votto does get Frazier into the lineup more easily, it's hard to understate what a blow this is to the team. Hopefully the rest of the team can get hot while he's out. Yesterday's game was a good step in that direction.

Xavier Paul is the new addition in Votto's absence. His career line is .245/.289/.340 in 413 major league plate appearances. Now 27, he did show some modest power in the minors, most recently 12 home runs in 250 PA's in 2010 (albeit at AAA-Alburquerque). His fielding numbers are pretty average--good arm, but just average range, despite mostly playing in corner positions throughout his MLB career. But that's only with a half-season or so of total data, which isn't enough to be very reliable. I like that he's left-handed, but I think we shouldn't expect a lot from him. You already knew that, I'm sure. 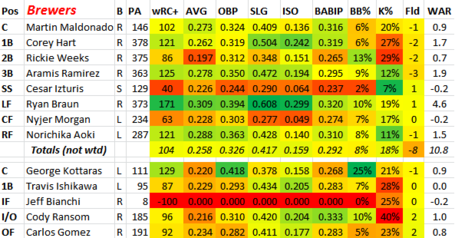 Ryan Braun has been out with a groin injury, but I think he's expected back today or tomorrow. He's been his usual dominant self. Rickie Weeks continues to be mysteriously absent, but that's offset in large part by Norichika Aoki's surprising play. The Brewers' usual catcher, Jonathan Lucroy, is currently on a rehab assignment, and is not expected to return until next Thursday. Martin Maldonado, however, has filled in quite well in his absence, as has the highly walkable George Kottaras.

Marco Estrada and Michael Fiers have both been excellent in limited action this year. But both also look to be fairly extreme fly ball pitchers, which is hopefully something the Reds can exploit when playing at Great American Ballpark. Yovani Gallardo is quality, however. Hopefully Bronson can bounce back from his last start and pitch well. 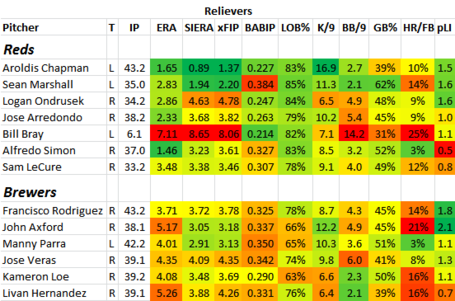 After yet another rough spell, John Axford has at least temporarily lost his grip on the closer job in Milwaukee. It's amazing to me that everyone in this pen has an ERA over 4, save for Francisco Rodriguez. It's been disastrous, despite good peripherals from Axford and Parra. Not that the team's fielding helps matters much.