Share All sharing options for: The HOF Induction Countdown for Barry Larkin

In Rob Neyer's Big Book of Baseball Lineups, the SBN patriarch writes that Barry Larkin was the "best-hitting shortstop of his era - yes , even better than Cal Ripken." The game's acknowledgement of Larkin's all-around greatness becomes official with this weekend's knighting, when he becomes the eighth player to become enshrined into the Hall of Fame as a Red. It's the team's' first honoree since the year 2000, when the Hall introduced the plaques of Tony Perez, Bid McPhee, and Sparky Anderson. We've talked before about Larkin's place among the game's shortstops (top five) and his meaning to Cincinnati baseball. We've explained his HOF worthiness, ranted when the writers failed to immediately appreciate his brilliance, and celebrated when the Hall gave him thumbs up. On to the pomp and pageantry.

The official ceremony takes place this Sunday at 1:30, which will be carried live by the MLB Network. To add a familial touch for Larkin, his daughter Cymber will sing the anthem beforehand. As usual several HOFers will attend, including Ozzie Smith, Larkin's predecessor as the National League's top shortstop, and Rickey Henderson and Dennis Eckersley, who were bested by Barry's Reds in 1990. The Big Red Machine trio of Johnny Bench, Joe Morgan, and Perez will also be there. And you can bet that Pete Rose will be inking his signature for cash money somewhere in Cooperstown.

Larkin was the writer's sole selection this year, but this weekend isn't all about him. The Veteran's Committee posthumously elected Ron Santo, who passed away one year and two days before the VC's vote was published. A well deserved and tragically overdue honor. There are also the awards given to the media, but thankfully those are issued separately on Saturday. Tim McCarver will receive the Ford C. Frick Award for excellence in baseball broadcasting, which makes me wonder if the powers-that-be have listened to a televised baseball broadcast since the Clinton administration.

As mentioned, Larkin's induction is the Reds' first in a dozen years. Dedicated in 1939, the Hall of Fame didn't welcome the first Red until 1962, when the Veteran's Committee elected centerfielder Edd Roush and manager Bill McKechnie. Eppa Rixey became the first Reds pitcher to gain induction the following year. Overall, the history of Reds inductions looks something like this: 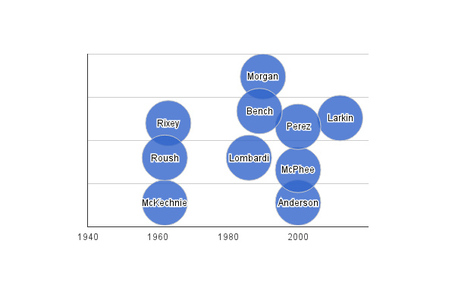 The sequence of some of these names is startling due to the longer waits for the lower-rung HOFers and the machinations of the Veteran's Committee. Ernie Lombardi's induction came nearly 40 years after his final season (and nine after his death), meaning that he beat Bench and Morgan to Cooperstown by just a few years even though generations separated them. Bench and Morgan sailed in on their first ballot, while BRM teammate Perez needed almost a decade to get his ticket punched. That was nothing compared to McPhee, who retired in 1899 - a full century before his enshrinement.

If you count the disqualified Rose, the Reds' nine player inductees ties them with the Tigers and White Sox in the team standings (though I suppose Chicago should then get a bump for Joe Jackson). It's not a terribly impressive showing - teams with less historical success like the Phillies and Cubs hold a slight edge over the Reds - but it's also hard to think of any no-doubt injustices former Reds have suffered. Dave Concepcion has a credible case, but never came close by the writers thanks to mediocre career batting numbers and perhaps BRM fatigue. Davey's best shot was with the Veteran's Committee in 2010, led by Bench at the time. He still fell several votes short. Frank Robinson should have gone in as a Red, but rightfully dons an O's cap in his plaque because he turned out to not be such an old 30. That wasn't the case for former teammate Vada Pinson, who declined sharply after producing a HOF-worthy start through his late 20s.

Perez retired after the 1986 season at a nearly Moyer-esque 44. That was Larkin's rookie year. With his induction, the post-BRM Reds gain a representative to carry the torch in Cooperstown. That's symbolically valuable for Reds fans too young to remember the Big Red champions, which at this point is just about everyone under 40 (I bet that makes the boomers feel old. Time to re-watch The Big Chill!). That new generation of Reds obviously includes the 1990 championship team, which in a small way gains legitimacy by having an official HOFer on the team. By my tally, every World Series winner from 1980 through the strike has at least one enshrined player except for the 1980 Dodgers and 1984 Tigers (who will fall off this list when Jack Morris gets in next year). Seeing Larkin banter with Eric Davis on MLBN after the good news confirmed for me that significance of Larkin's induction transcends his individual career.

It turns out that Cooperstown is in the middle of nowhere. It's far from interstate expressways and lacks an appropriate amount of hotels. For this rare of an occasion, I think it's well worth the logistical inconveniences. If you're also planning on making the trek, you're probably aware of everything that's on tap for the HOF weekend. In addition to Sunday's ceremony, Larkin will also participate in Monday's Voices of the Game: Inductee Memories. He'll be joined by Perez and Ron Santo's former teammate Billy Williams. Drop me an email (listed in my profile) if you want to share a celebratory fistbump during Sunday's ceremony.

Enjoy this Sunday! With a dozen years remaining on Joey Votto's contractual obligation, it's gonna be a long haul before we celebrate another one of our own at Cooperstown.