The Joe Nuxhall Memorial Honorary Star(s) of the Game

The last three games have been, by all accounts, three of the most different baseball atmospheres I've ever witnessed. Sunday's game vs. the Cardinals was a showdown on the largest stage in baseball, and was back and forth to foot the bill. Yesterday's game was every bit as deflating as the news about Votto's knee. Today's was, well, just weird...and long. I don't know what to make of it exactly, but at least the Reds pulled out the win.

Johnny Q-totes was less than his spectacular self coming off his Star of All-Stars break (y'know, the one reserved for the guys too good to bother playing in the meager exhibition game), and his blisters likely caused a bit of wildness that ran his pitch count up too early to get past the 6th inning.

He was good, but Ryan Ludwick gets the nod as the JNMHSotG. Luddy hit the defining blast of the game, a 3 run jobber that, with Cueto & the Bullpen Boys pitching, put the game out of reach. He walked, too, and put an early spitball on the "guy who steps up while Votto is hurt" poster in Scrabbles' hallway. Props, Studwick. 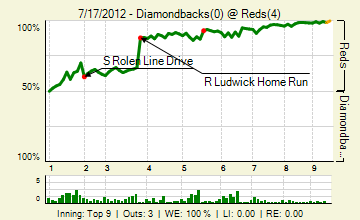