Share All sharing options for: Series Preview: Diamondbacks vs. Reds 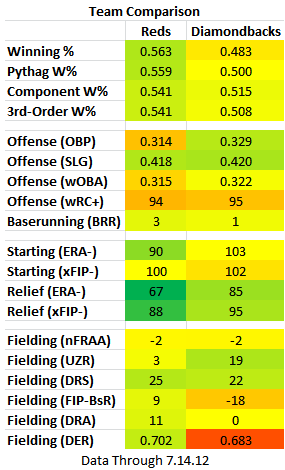 After the exciting sweep this weekend against the Cardinals, the Reds welcome the Diamondbacks for a four-game series. It's been a fairly ho-hum season for the team that hails from my old stomping grounds. They're currently in third place in the AL West, 6.5 games behind the Giants.

They're a very average-looking team. Offensively, they have posted good overall numbers, but after park adjustments they grade out as a bit below average. Their starters have been right around league average, while the bullpen has been a bit above average. Fielding wise, it's hard to say given all the disparate measures...but given what a hitters' park Chase Field is, I lean toward the metrics that have park adjustments (UZR, for example).
Anything can happen, but I don't see the Diamondbacks making a big run in the NL West. They're solid and have some exciting players, but among other reasons, they just lost Daniel Hudson for the season to TJ surgery. The one factor that might mitigate this is that they have Justin Upton, who still could go berserk in the second half. 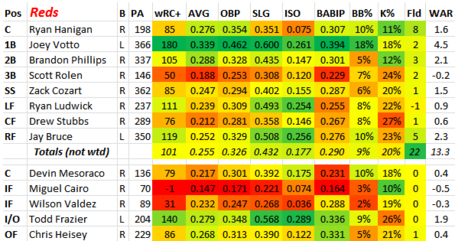 Don't look now, but Ryan Ludwick is in the green: wRC+ of 111, which is solidly above average. I was as skeptical of the signing as anyone, but I'd be perfectly happy with a .239/.309/.493 line for the season if he can do that the rest of the way. Saturday was fun. 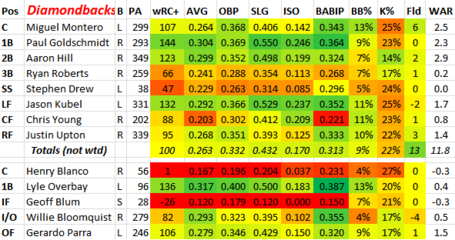 The most interesting guy on this team is Justin Upton. He has two seasons just shy of a .900 OPS, .899 in 2009 and .898 in last season. There was a .799 season in between in which his strikeouts skyrocketed and his power evaporated. This year, he's posting the poorest ISO of this career, and has seen his strikeout rate increase from a career-best 18.7% last year to a current 22.4% (still below his career average, though). I don't know what the problem has been this season....but I do know that he's just 24 years old.

The second-most interesting? Paul Goldschmidt. For a long time, he seemed like a classic example of one of those huge first basemen who post outstanding power numbers in the minors, but about whom scouts were skeptical. As his career went on, and he continued to rake at higher levels, though, scouts began to come around. Now, through 470 career plate appearances, he's hit .284/.355/.522. I'm not ready to nominate him for the second-best first baseman in the National League, but he might be in that conversation.

Ryan Roberts still has a job. I find that pretty impressive. Must be the tatoos. 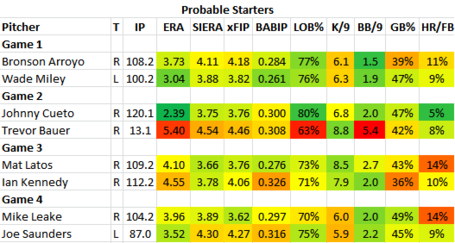 Trevor Bauer! Last year's third overall pick, and a guy who has stirred some interest due to his unorthodox delivery and training methods, not to mention talent, gets the ball for game 2 of this series. His major league numbers are pretty what you'd expect--lots of strikeouts, but lots and lots of walks. I'm excited to see him, and I hope the Reds are patient with him.

The guy that surprised me the most here is Wade Miley. Last year, he made his major league debut after a solid but not other worldly minor league career and posted a 4.50 ERA with a 4.35 xFIP. 5.6 k/9, 4.1 bb/9 in 40 innings. He was so far off my radar I didn't even realize that he'd made the all star team (I only watched through Votto's second AB). But he's had himself a heck of a season, with a nice uptick in his strikeouts and very impressive walk numbers. I don't know if it'll last, but the Dbacks must be beyond thrilled with what he's done for them.

Kennedy is always tough, but allows a lot of flies. And Saunders...well...Joe Saunders is not a good pitcher, but is never quite as horrible as I expect him to be. 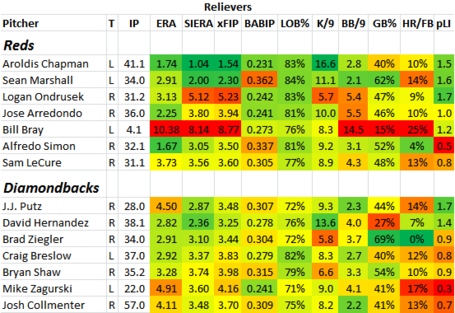 J.J. Putz had a pretty shaky start to the season, and for a while seemed in danger of losing his job to David Hernandez. But a few poorly-timed bad outings by Hernandez seemed to put that issue on the back burner, at least for the time being. Really, either pitcher would be fine in that role, and there's very little difference in overall performance among any of their big-three relievers (including Ziegler)....though how they achieve their success differs dramatically. Brad Ziegler, in particular, is fun because he's such an extreme groundballer. I love guys who can post almost 70% GB%'s--it almost doesn't matter what else they do! Craig Breslow may be trusted with a few of the critical LOOGY situations in this series, and he's prone to giving up fly balls. That could mean good things for the Reds.