Share All sharing options for: Series Preview: Cardinals vs. Reds 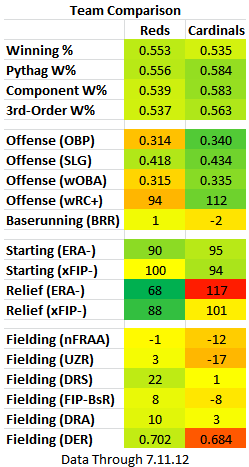 The Reds kick off their second half with a bang by facing what is arguably the best team in the NL Central, at least by the numbers. Their record may lag a bit behind the second-place Reds', but every other indicator of overall team performance suggests they've been the more impressive team. The Cardinals, despite playing without Lance Berkman for pretty much all of the first half, have featured a brilliant offense and very solid starting pitching to post a .583 component winning percentage--best in the NL Central by a comfortable margin.

That said, they are not invulnerable. I expect their offense to decline, their pitching staff is dealing with two crippling injuries (though one has been a problem all year), and they are not a strong defensive ballclub. But they scare the heck out of me. Say what you will about performance about good teams and such, I think this is still the team to beat in the NL Central--and they really have been all year long.

In case any need a reminder, GABP is a moderate hitters' park. Home runs play up, especially for right-handed batters, but many other offensive statistics play "down." 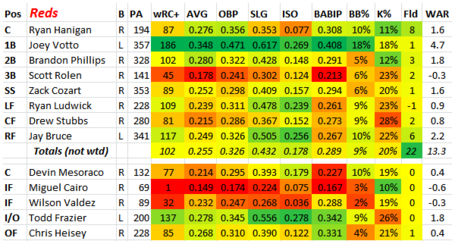 Looking at the Reds' overall hitting numbers entering the second half, the thing that strikes me is that the starting lineup has an average BABIP of .289. And that's INCLUDING Joey Votto's insane .408 (<--don't ask me if that's sustainable...I'm not sure that it isn't, he's ridiculous). Now, if you swap Todd Frazier in for Rolen, as will happen often enough, the number jumps to .306. But again, that's with Votto. The starting outfield has BABIP'd .267 this season, a mark that is well below the career numbers of those three guys. Drew Stubbs, in particular, is way below his norms (career .325 BABIP), and his strikeout is the lowest of his career (27.5% current; last year it was 30.1%) Therefore, I think we have reason to hope that this number can increase, and with it the team's overall offense (especially OBP). I just hope Votto can keep some semblance of this up... 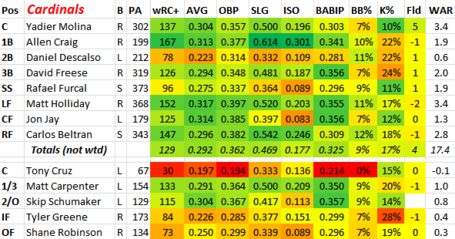 Yadier Molina was listed as on the bereavement list when I wrote this, but I expect him to be activated for tonight's game.

My goodness this must be a fun offense to watch for Cardinals fans. There's no question that they have some legitimate excellent to outstanding hitters (Holliday, Beltran, maybe Freese), but I also think any reasonable person would expect some of these guys to decline in the second half. People love Allen Craig as an offense-oriented infielder, for example, but I don't believe that he's this good. And Jon Jay had a brilliant month of April, but is probably closer to league average than he's been--similar arguments can be made for Yadier Molina.

Still, calling for a collapse of this team's offense in the second half is probably an error. The pending return of Lance Berkman could be a huge for this team. Furthermore, an often-overlooked bonus for this team is the quality of their bench. Guys like Matt Carpenter, Allen Craig (once Berkman returns), and even Skip Schumaker are solid bench players (at least). The Reds don't have that kind of depth.

Lance Lynn got his spot in the rotation when Chris Carpenter came down with his nerve situation and, arguably, has saved this rotation. He's really been brilliant, posting tons of strikeouts and generally keeping the ball on the ground. Adam Wainwright hasn't gotten the results yet, but coming off of TJ surgery, I don't think he could really have expected a better first half. All of the peripherals are there, and he's poised to have a great second half. And Jake Westbrook does what he does: lots of ground balls, relies on infield defense to keep him in the game. It works well, especially when he keeps his walks in check (as he has done this year).

For their part, the Reds' first three coming out of the shoot are all looking quite good. I still expect Cueto to decline in the second half, but Latos has been coming on strong of late and Mike Leake's numbers look about where you'd expect them to be--though I'd like to see his ground ball percentage tick up a little bit. 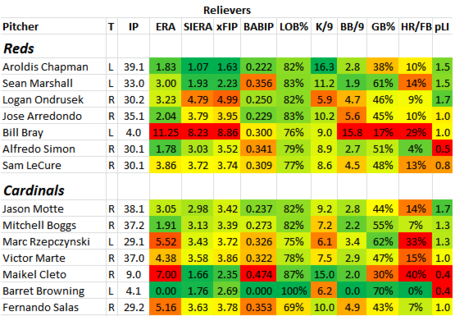 Remember when Fernando Salas was the closer last year? While the back end of the Cardinals' pen has been solid this season--Jason Motte has been fine in the closer role, and Mitchell Boggs has been very good as a setup guy--their mid-inning crew have struggled badly. SIERA and xFIP indicates that they're not throwing as badly as their ERAs suggest, but they're not outstanding either. At best, this is probably an average bullpen.

Let's play a game...who would you take the rest of the way among these teams' middle relievers? Logan Ondrusek or Victor Marte or Jose Arredondo for your righty? Bill Bray or Marc Rzepczynski for your lefty?