Share All sharing options for: Must've been cold in Milwaukee tonight, since Homer wore his wool #poopsocks. Reds lose, 8-3.

Jay Bruce has carried the Reds' offense for almost two full weeks now, and tonight was no different. Hard Jay extended his hit-streak to 11 games with his 6th inning 2-run HR off of Yovanni Gallardo, and he followed that up with a hard hit single to center. Bruce finished 2 for 4, and was by far the heart of the offense tonight. 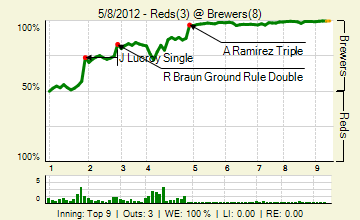