Weaver fails to Vander Meer, and a book report

Share All sharing options for: Weaver fails to Vander Meer, and a book report

"I hope it won't affect him too much. But you know what's going to come up. The old thing. Vander Meer."

"To just get one is hard enough. To follow it up with one is pretty ridiculous, so I think that's going to stand for quite some time. I don't see anyone else going out there and doing that."

Erik Komatsu Vernon Wells singled up the middle in the third inning of yesterday's Angels-Twins game, a forgettable hit if not for Jered Weaver's no-hitter against those same Twins five nights earlier. We typically see just a few no-hitters every season (231 total since 1900), so the probability that the same pitcher throws two in one season is tiny. The odds that a pitcher throws two consecutive no-no's is incomprehensibly small. And that's why Johnny Vander Meer, owner of a 119-121 career record, occupies a permanent place in baseball lore.

As famous as Vander Meer's twin feats are, there hasn't been an entire book dedicated to the double no-hitters until recently. James Johnson's Double No-Hit: Johnny Vander Meer's Historic Night Under the Lights puts those two games, and Vander Meer's career, under the microscope. It's well-researched and a fun read for any fan with an interest in Reds history or Depression-era baseball in general.

Vander Meer, the son of a first generation Dutch mill worker, threw his famous games as a rookie in June of 1938. In the times before Baseball America and hotly-traded Upper Deck rookie cards, prospects didn't garner much attention. But Vander Meer arrived with considerable hype for his era after The Sporting News named him its Minor Leaguer of the Year in 1936. The big lefty used a blazing fastball to strike out 295 hitters to go along with a 2.65 ERA for Durham that season. He didn't fare as well the following year for both the big league team and Syracuse, but he got a fresh start with the Reds after Bill McKechnie was named Manager before the '38 season. 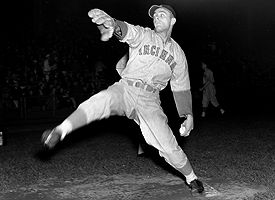 The book's biographical asides about McKechnie and other secondary figures are largely enjoyable. McKechnie, a master handler of pitchers and personalities, shifted Vander Meer's arm slot from a three-quarters delivery to a straight overhand. More importantly, he gave Vander Meer's confidence the shot in the arm it needed. Vandy considered leaving baseball if he didn't make the Reds roster out of Spring Training in '38 and credits McKechnie for changing his outlook. And even though McKechnie was nicknamed "The Deacon," he wasn't a complete choirboy in his management of the team - no whiskey, but beer was permitted in the clubhouse after wins.

Despite the title, the book serves as a quasi biography of Vander Meer with an extended look at his twin masterpieces. The first came at Crosley Field on June 11 against Boston. Vander Meer dazzled like a Vermeer against Casey Stengel's poor-hitting Bees (who would go back to using the "Braves" trade name a few years later). He struck out four, walked three, and according to the author, allowed only four well-struck balls. He faced the minimum thanks to a Lombardi pick-off and two double plays.

There was considerable buzz in Brooklyn for Vander Meer's next start, but not for the reasons you'd think. For one, it was the first night game at fabled Ebbets Field. There's an interesting passage in the book on the background of night baseball, which of course started in Cincinnati a few seasons before. Adding to the carnival atmosphere was a track exhibition put on by Jesse Owens, who raced and lost to two Dodgers in two separate races. Owens gave the first player a head-start and ran hurdles against the second. Finally, the game also featured a spontaneous visit from the retired Babe Ruth. He briefly donned a Reds cap while stepping into the visitor's clubhouse to congratulate the young Vander Meer on his recent gem. He later stepped into the box during batting practice to hit a few balls over the fence. The Dodgers offered him the first base coaching position on the spot, and Ruth accepted.

Due to all the commotion plus the forty-five minutes it took to fully illuminate the field, the game did not start until 9:23. It was no matter for Vandy, as he picked up where he left off against the Braves. Though he struggled with his control (walking 8), Vander Meer struck out 7 and did not need the benefit of any questionable scoring decisions to nail down his place in baseball immortality. Thanks to Vander Meer's intermittent wildness, there was plenty of drama to finish the game. Vander Meer walked the bases loaded with just one out in the ninth inning but secured his masterpiece with a groundout and then a soft fly ball from Leo Durocher to centerfield. Though Durocher later boasted in his autobiography that he scorched a "line drive ... caught right off [CF Harry Craft's] shoe tops," Craft confirmed that "the truth was, it was like a feather on a feather bed."

The no-hitters were part of a dominating six-game stretch for Vander Meer (55 innings, four runs) that led to him starting the All-Star game at Crosley Field. Vandy struggled to recapture his control the following two seasons, however, suffering through his worst years even as the team ascended to the top of the National League in '39 and '40. Then, as riverfront76 has noted, Vander Meer emerged as one of the game's most dominating pitchers during the war-depleted years of '41-'43. The Dutch Master led the league in strikeouts all three seasons and threw over 750 innings with an ERA+ of 125. The Navy drafted Vander Meer, then 29, after that season. He returned in '46, but his best playing days were now behind him.

As for the book itself, Johnson breaks up the play-by-play of the second no-hitter with frequent vignettes about other players and longer asides about issues of the day. The book is at its best in these "slice of life" portions because Vander Meer - a "typical Dutchman," the author notes - is a somewhat bland subject. But the combination of Johnson's well written no-hitter recaps along with an engaging look at pre-War baseball made the book enjoyable.